Independent media and citizen journalists continue to do the job the major media have abdicated.

An election worker in Clark County, Nevada has signed a sworn affidavit claiming that mail-in ballots were improperly filled out in a Biden-Harris van outside a polling place. 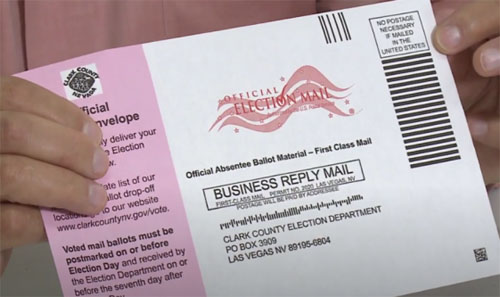 “I personally witnessed two people handing multiple unopened mail in ballot envelopes to two other people who then opened and filled out the ballots against the side of the Biden/Harris van,” the affidavit said. “The same two people who marked the ballots then put the marked ballots in official pink and white envelopes. These people were not poll workers.”

The affidavit continued: “By my final walking lap, there were 5 or 6 additional people who formed a human wall, which moved as I walked by, apparently in an attempt to block my view of the four people who were opening envelopes, marking ballots, and placing those ballots in the pink and white return envelopes.”

President Donald Trump trails by about 36,000 votes in Nevada.

The whistleblower reported the incident to a supervisor, who then called the Clark County Elections Office, to no avail, saying: “Someone there told her nothing could be done about the ballots or envelopes being handled outside at the Biden/Harris area.”

The elections office noted that “ballot harvesting is legal in Nevada,” according to the affidavit, but that practice is not what the whistleblower detailed.

The Nevada whistleblower also said that voters without proper identification were permitted to cast provisional ballots.

Another Clark County whistleblower who worked in a ballot-counting center has signed an affidavit claiming that a supervisor instructed the person to process mail-in ballots despite concerns about whether the signature matched the name on the envelope.

In other election developments:

According to the court documents, after election officials announced that the last batch of absentee ballots had been received, trays of unsealed, unsecured ballots without envelopes arrived at the TCF Center in Detroit.

“There were tens of thousands of these absentee ballots, and apparently every ballot was counted and attributed only to Democratic candidates,” the lawsuit states. The ballots allegedly arrived in vehicles with out-of-state license plates, a separate sworn affidavit states.

Elections officials instructed poll workers to backdate ballots that arrived past the deadline, ignore signature mismatches, and push through ballots despite questionable validity, the lawsuit alleges.

“I processed absentee ballot packages to be sent to voters while I worked at the election headquarters in September 2020 along with 70-80 other poll workers,” Jessy Jacob, a Michigan poll worker wrote in a sworn affidavit. “I was instructed by my supervisor to adjust the mailing date of these absentee ballot packages to be dated earlier than they were actually sent. The supervisor was making announcements for all workers to engage in this practice.”

Voters who showed up at the polling site but could not be found on the voter files had ballots assigned to them from a random name on the qualified voter files, according to another sworn affidavit.

“The fraud and blatant disregard for chain of custody observed at the Detroit Absentee Voter Counting Board may be responsible for well over the 146,123 votes currently promoted by media outlets as the Biden margin of victory in Michigan, not to mention the margin in favor of Peters in the U.S. Senate Race,” poll watcher Patrick Colbeck wrote in an email to The Epoch Times.

Some 132,000 ballots have change of address flags in Fulton County, Georgia, according to a report by Kyle Becker and People’s Pundit. These ballots are likely ineligible, People’s Pundit tweeted.

Joe Biden leads Georgia, which has 16 electoral votes, by about 10,000 votes.

The Trump campaign announced that Republican Rep. Doug Collins of Georgia will lead the recount effort in Georgia.

Matt Morgan, general counsel for the Trump campaign, said there are concerns “about the lack of transparency in the tabulation process,” citing what he referred to as “reports of irregularities and improper ballot harvesting in Georgia.”

Just the News reported that Wisconsin election supervisors made changes in 2020 that impact potentially tens of thousands of ballots in the state that Joe Biden leads by just 20,000 votes.

The report noted the chances by the elections supervisors included:

• Permitting local county election clerks to cure spoiled ballots by filling in missing addresses for witnesses even though state law invalidates any ballot without a witness address.
• Exempting as many as 200,000 citizens from voter ID rules by allowing them to claim the coronavirus pandemic caused them to be “indefinitely confined.”
• Failing to purge 130,000 names from outdated voter rolls as required by law.

Data scientist Sarah Eaglesfield wrote on Twitter that she was tracking the vote counts in Virginia in real-time on election night and into the following morning when she noticed a glitch.

Between 4:42 and 5:12 a.m. the state lost 169,000 votes, Eaglesfield noted. Trump had been smashing expectations in Virginia at the time.

Eaglesfield had noted in another tweet: “The moment when Michigan counted 149,772 votes in 5 seconds and less than 6,000 of them were for Trump.”

It was no surprise that the jackbooted censors at Twitter slapped a “This claim about election fraud is disputed” tag on Eaglesfield’s tweets.

Meanwhile, Trump campaign adviser Jason Miller said conceding the 2020 presidential election is “not even in our vocabulary right now.”

Asked Monday on Fox Business Network about Trump possibly conceding, Miller said: “That word is not even in our vocabulary right now. We’re going to pursue all of these legal means, all of the recount methods. We’re going to continue exposing and investigating all these instances of fraud or abuse, and make sure that the American public can have full confidence in these elections. It’s not just our campaign saying we need to go through these, in certain states like Arizona, Georgia, and others, these are mandatory recounts that are coming up. We have to go through the process and a lot of Americans — 71 million Americans — voted for this president, so they want to make sure that justice is served.”