Mueller testimony in review: Covering up a massive Democrat-DOJ-FBI scandal

Following Robert Mueller’s congressional testimony on July 24, analysts and a former FBI official rebuffed expressions of sympathy for the special counsel and said that he was protecting those behind the “collusion” hoax.

Following Mueller’s testimony, it is “now clear” that his investigation was not solely related to Russian interference in the 2016 election, “it was equally about protecting the actual miscreants behind the Russia-collusion hoax,” Kimberley A. Strassel wrote in a July 26 op-ed for the Wall Street Journal. 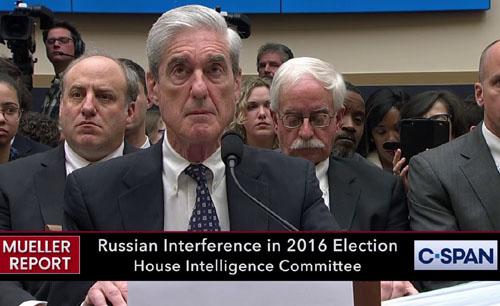 Radio host Rush Limbaugh said: “Now, I know people are saying ‘Rush, the man’s an American hero. It’s the twilight of his life. He’s obviously not all there. Why continue to hit the guy?’ Because this man is allowing his reputation to be used to press abject lies. This man is allowing his reputation for honor and integrity and unassailability to be used as the cloak, as the disguise, as the cover for a whole lot of lies that are slanderous and libelous to boot, if we weren’t talking about a political figure.”

Limbaugh continued: “So, no, there’s nothing about Mueller being kept in the dark and not knowing what’s going on. I mean, that may be the case in the sense that he doesn’t have the energy anymore to actually do a 9-to-5 or 9-to-8 day every day with exhaustless energy interviewing people. Those days are long ago, but there’s no way anybody’s pulled the wool over his eyes. He is an active participant in this coup. He is an active participant in this effort because he is a member in good standing of the Washington establishment, and they are all unified in the effort to get rid of Donald Trump however and whenever.”

Writing for The Hill, former assistant director of intelligence for the FBI Kevin R. Brock, said that Mueller’s “pedigree of service to this nation” … “does not inoculate him from fair criticism, and this he invited in a number of ways during his appearance before the House Judiciary and Intelligence committees.”

Brock said the nation “lost much of our trust” in Mueller “and that’s a shame, for him and for us.”

In the end, Brock wrote, “Mueller’s rough day of congressional testimony brought added texture to what the American people are seeing more clearly with each passing day: The processes and infrastructure of government that we trust to fairly administer justice were imperiled for naked political motivations and advantage. It was cynical and wrong, and it begs for reform so that it never happens again.”

Strassel wrote: “The most notable aspect of the Mueller report was always what it omitted: the origins of this mess. Christopher Steele’s dossier was central to the Federal Bureau of Investigation’s probe, the basis of many of the claims of conspiracy between the Trump campaign and Russia. Yet the Mueller authors studiously wrote around the dossier, mentioning it only in perfunctory terms. The report ignored Mr. Steele’s paymaster, Fusion GPS, and its own ties to Russians. It also ignored Fusion’s paymaster, the Clinton campaign, and the ugly politics behind the dossier hit job.”

Mueller’s testimony “put to rest any doubt that this sheltering was deliberate,” Strassel wrote. “In his opening statement he declared that he would not ‘address questions about the opening of the FBI’s Russia investigation, which occurred months before my appointment, or matters related to the so-called Steele Dossier.’ The purpose of those omissions was obvious, as those two areas go to the heart of why the nation has been forced to endure years of collusion fantasy.”

Mueller claimed he couldn’t answer questions about the anti-Trump dossier as it “predated” his tenure as special counsel and is the subject of a Justice Department investigation.

“These excuses are disingenuous,” Strassel wrote. “Nearly everything Mr. Mueller investigated predated his tenure, and there’s no reason the Justice Department probe bars Mr. Mueller from providing a straightforward, factual account of his team’s handling of the dossier.

“If anything, Mr. Mueller had an obligation to answer those questions, since they go to the central failing of his own probe.”

Florida Republican Rep. Matt Gaetz stated it clearly in questioning Mueller: How could a special-counsel investigation into “Russia’s interference” have any credibility if it failed to look into whether the Steele dossier was itself disinformation from Moscow? Steele acknowledges that senior Russian officials were the source of his dossier’s claims of an “extensive conspiracy.”

Given that no such conspiracy actually existed, Gaetz asked: “Did Russians really tell that to Christopher Steele, or did he just make it up and was he lying to the FBI?”

Mueller surreally responded: “As I said earlier, with regard to Steele, that is beyond my purview.”

As Republicans continued to ask basic questions about his report’s conclusions or analysis, Mueller “dodged and weaved and refused to avoid answering questions about the FBI’s legwork, the dossier’s role and Fusion’s involvement,” Strassel noted.

Ohio Rep. Steve Chabot asked how the report could have neglected to mention Fusion’s ties to a Russian company and lawyer. Mueller: “Outside my purview.”

California Rep. Devin Nunes asked several questions about one of the men at the epicenter of the “collusion” conspiracy — academic Joseph Mifsud, whom former FBI Director James Comey has tried to paint as a Russian agent. Mueller: “I am not going to speak to the series of happenings as you articulated them.”

Mueller’s “often befuddled testimony has predictably raised questions about how in control he was of the 22-month investigation or the writing of the report.” Strassel wrote. “Yet in some ways it matters little whether it was Mr. Mueller calling the shots, or ‘pit bull’ Andrew Weissmann, or Mr. Mueller’s congressional minder, Aaron Zebley. All three spent years in the Justice Department-FBI hierarchy, as did many of the other prosecutors and agents on the probe. That institutional crew early on made the calculated decision to shelter the FBI, the Justice Department, outside private actors, and leading Democrats from any scrutiny of their own potential involvement with 2016 Russian election interference.”

Strassel continued: “That’s been the story all along. Mr. Comey hid his actions from Congress; the Justice Department and FBI worked overtime to obstruct Republican-led congressional probes; and Mr. Mueller and his team are clearly playing their own important role in hiding the truth. The Mueller testimony only highlights how important it is that Attorney General William Barr is finally pursuing accountability.”