A legal gun owner in Philadelphia shot two intruders, one fatally, during an alleged attempted burglary on Sunday.

Following the ordeal, the 25-year-old said he plans on leaving the violence-plagued city as soon as possible and also urged Philadelphia residents to obtain a concealed carry permit. 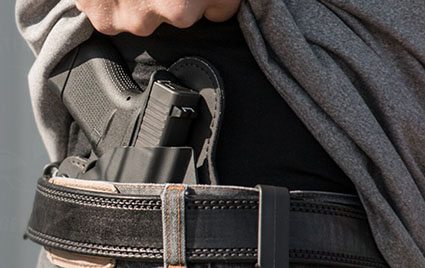 The 25-year-old man told police that two male suspects approached him outside his duplex and claimed to be police officers. The suspects then restrained the victim with zip ties and threatened to kill him if he did not give them money.

“They tied his hands with zip ties around his back and threatened to kill him if he made any sudden moves. That’s when our victim realized these individuals were not police officers,” Philadelphia Police Chief Inspector Scott Small said, according to Fox 29 Philadelphia.

The 25-year-old man eventually managed to break free, reach for a gun he was carrying, and fire multiple rounds at the suspects, striking one three times.

Responding officers found a man with gunshot wounds to the head, chest and arm. He was transported to Jefferson Torresdale Hospital, where he was pronounced dead at 10:19 p.m., law enforcement officials said.

“Everyone in Philadelphia should have permit to carry a concealed weapon,” the victim told Fox 29’s Steve Keeley. The legal gun owner added that he is actively trying to leave Philadelphia. “This city is crazy. I am moving outta here.”

More than 50 people were shot in Philadelphia from Thursday afternoon through Monday morning, nine of them fatally.

Philadelphia is on pace for more than 500 murders for the second straight year.