Under the guise of “police reform,” Democrats [not Republicans] in the Maryland House of Delegates in March passed defund the police legislation.

Vanessa Atterbeary, a Democrat delegate who helped shape the legislation, described the measure as “a huge leap forward in terms of police reform for the state of Maryland.”

Actually, it is anti-police, opponents said, pointing out that the bill would start the process of eroding law enforcement in Maryland.

Haven Shoemaker, a Republican delegate, said besieged police officers have told him the bill “will make their lives difficult, if not impossible” and cause police to quit throughout the state.

“So, ultimately we won’t have to worry about either defunding or defanging the police, because we won’t have any officers to defund or defang,” Shoemaker said.

The legislation limits no-knock warrants on residential property between 8 a.m. and 7 p.m., except in an emergency.

“That is how innocent people get shot,” Atterbeary said during debate on the bill.

Opponents said it opened a wide window for criminals to conceal illegal activity.

“So, at 8 o’clock, the drug dealer gets all the drugs out, puts them all over the dining room table and knows there won’t be a search warrant. This is bad public policy,” said Del. Kathy Szeliga, the House minority whip.

On Tuesday, Michelle Cummings of Houston was visiting Maryland to drop off her son at the U.S. Naval Academy in Annapolis.

Cummings, 57, was sitting on a hotel patio when she was shot multiple times just after midnight, Annapolis Police Chief Edward Jackson said. Cummings died from the gunshot wounds. Police say she was not the intended target.

Her son, Midshipman Candidate Leonard Cummings III, graduated this year from the Naval Academy Preparatory School in Rhode Island, and is an incoming freshman for the Naval Academy Class of 2025, the Academy said.

Last year, when Leonard committed to the Naval Academy, Michelle Cummings told ABC Houston station KTRK-TV: “I love this kid dearly … We could not ask for a better son.”

Annapolis Mayor Gavin Buckley, a Democrat, told reporters Tuesday: “This city’s heart is broken. There are no circumstances where this can be tolerated.”

In reality, such “circumstances” are routinely tolerated, especially in areas where the Left is intent on defunding the police.

Buckley loyally followed the Democrat Party narrative by blaming the tragedy on the availability of guns.

But, amid Democrats’ constant push for more gun-control to prevent them from doing so, Americans of both parties and all ethnicities are legally buying firearms at a record pace in 2021.

Critics say it is the Democrats’ policy of defunding the police and dismantling law enforcement tools such as bail that is partly responsible for tragedies such as the one the Cummings family is dealing with.

Democrats want to defund the police.

Critics say the elitists who run the Democrat Party and the newsrooms of their corporate media allies have no regard for the safety and security of residents of the inner cities their policies are destroying.

But, they pay attention to polling.

Democrats have once again called on the corporate media, or what are essentially state propaganda outlets, to flip the defund the police narrative onto Republicans.

White House Press Secretary Jen Psaki this week claimed that Republicans are the ones trying to defund the police via their opposition to runaway spending of taxpayer dollars in the $2 trillion covid legislation which is deviously titled the “American Rescue Plan.”

“Well, the president did mention that the American Rescue Plan, the state and local funding, something that was supported by the president, a lot of Democrats who supported and voted for the bill, could help ensure local cops were kept on the beat in communities across the country. As you know, [it] didn’t receive a single Republican vote. That funding has been used to keep cops on the beat,” Psaki said in response to a question from Fox News’ Peter Doocy on Tuesday.

Biden cheerleader and Washington Post columnist Jennifer Rubin agreed with her overlords, tweeting: “Even the Squad is more pro-police than these Republicans” as she shared a new op-ed from Dana Milbank entitled, “Republicans have a new strategy: Blue Lies Matter.” 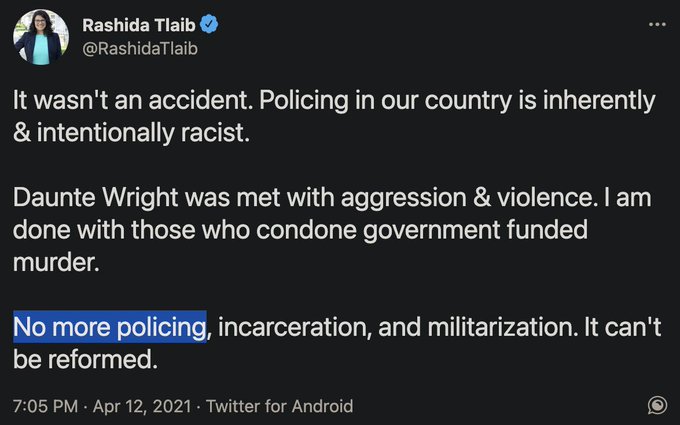 Another “squad” member, New York Democrat Rep. Alexandria Ocasio-Cortez, has not only supported defunding the police, but has doubled down on the idea even after Democrat House losses last November, which many blamed on the radical rhetoric coming from AOC and the like.

“I believe the path toward justice is a long arc. Safety is not just an officer with a badge and a gun,” Ocasio-Cortez maintained. “Our [police budget] is too high,” she said of the then-$6 billion figure for the NYPD.

Fox News host Sean Hannity called Psaki’s Defund the Police talking points an “outright lie.” He wondered when the fact checkers would publish an analysis of it.

“Where are the so-called fact-checkers at The Washington Post or fake news CNN or PolitiFact, maybe they want to weigh in on this one,” Hannity said. “Just might be the most blatant lie in modern American politics. But you don’t have to take my word for it because we actually have proof. It’s called videotape. Thank God for videotape.”

The attempts by Team Biden and their loyal comrades in the media to flip the narrative on defunding the police won’t work.

Democrats own the issue and they won’t be able to run away from it in the 2022 midterms and beyond.

Annapolis, Michelle Cummings, Mom dropping off son at Naval Academy is shot and killed in ‘defund the police’ state of Maryland, WorldTribune.com