Minister of Disinformation? Kinzinger falls for ‘Ghost of Kyiv’ meme, calls for Ukraine no fly zone

Illinois RINO Rep. Adam Kinzinger often lectures about the “dishonesty” he insists is coming from what he views as a toxic America First wing of the Republican Party.

But Kinzinger fell hook, line and sinker for a notorious meme regarding the heroic “Ghost of Kyiv” pilot shooting down Russian aircraft. He tweeted: “The ghostofkyiv has a name, and he has absolutely OWNED the Russian Airforce. God speed and more kills, Samuyil!”

The tweet featured a story on how the so-called “Ghost of Kyiv” had shot down six Russian fighter jets. It included a photo of the pilot, identified as Samuyil Hyde. 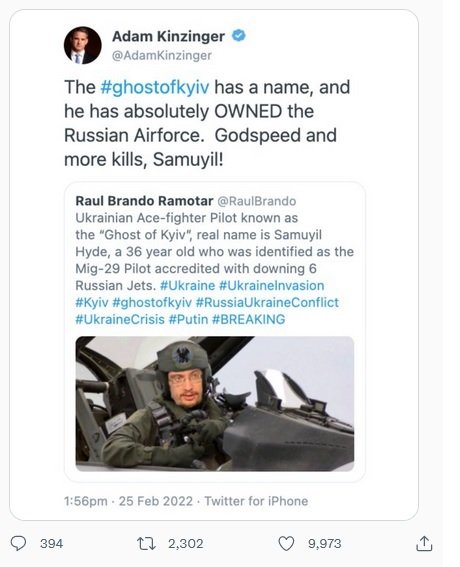 In reality, it is a long running Internet dark joke where perpetrators of shootings or attacks are identified as Sam Hyde, a comedian. Numerous journalists and politicians have named suspects as Sam Hyde, typically alongside a photo from one of Hyde’s YouTube videos, in which he can be seen holding a rifle. In the photo Kinzinger shared, the head of Sam Hyde was poorly photoshopped onto a Ukrainian pilot.

Kinzinger was the one getting “OWNED” on this occasion. He deleted the tweet.

Kinzinger also shared a photo of Ukrainian tanks reportedly headed for the front to fight off the new Russian invasion. The photo was taken in 2014. Dishonesty? Or maybe Kinzinger just believes that Ukrainian tanks move incredibly slowly.

Oh, and Kinzinger has called for a no fly zone over Ukraine, a move that Russia has warned would lead to nuclear confrontation.

Independent journalist Glenn Greenwald blasted Kinzinger’s proposition: “Having the U.S. risk global nuclear annihilation over Ukraine is an indescribably insane view, as one realizes upon a few seconds of sober reflection. We had a reminder of that Sunday morning when ‘Putin ordered his nuclear forces on high alert Sunday, reminding the world he has the power to use weapons of mass destruction, after complaining about the West’s response to his invasion of Ukraine’ — but it is completely unsurprising that it is already being suggested.”

Since he won’t be running for re-election in this year’s midterms, has Kinzinger been unofficially appointed Minister of Disinformation for the Biden regime?

Minister of Disinformation? Kinzinger falls for ‘Ghost of Kyiv’ meme, calls for Ukraine no fly zone added by Editor Two on February 27, 2022
View all posts by Editor Two →