Team Biden’s climate change agenda was dealt a major setback on Thursday when West Virginia Democrat Sen. Joe Manchin indicated he would not support any climate legislation prior to the 2022 midterm elections. 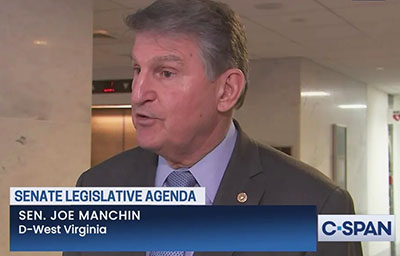 Manchin and his staff reportedly communicated to Senate Majority Leader Chuck Schumer’s office that Manchin would not support any bills before the midterms dealing with energy and climate change issues, or closing tax loopholes.

Team Biden is pushing for the Senate to invoke reconciliation which would allow the White House to pass certain measures by a simple majority of 51 votes. With the Senate deadlocked at 50-50 and Kamala Harris serving as the tie-breaking vote, insiders say Team Biden was hoping to get climate change legislation through to appease the Democrat base before November. In order to do so, the Biden team was counting on the support of Manchin.

“Political headlines are of no value to the millions of Americans struggling to afford groceries and gas as inflation soars to 9.1%,” Manchin spokesperson Sam Runyon told Fox News Digital in a statement.

The statement added, “Senator Manchin believes it’s time for leaders to put political agendas aside, reevaluate and adjust to the economic realities the country faces to avoid taking steps that add fuel to the inflation fire.”

Manchin’s announcement now forces Democrats to feed climate legislation through the usual legislative channels, which would require 60 votes to pass the Senate, essentially meaning that any such bill is dead on arrival.