Migrants bringing covid into U.S. allowed to board buses to the heartland 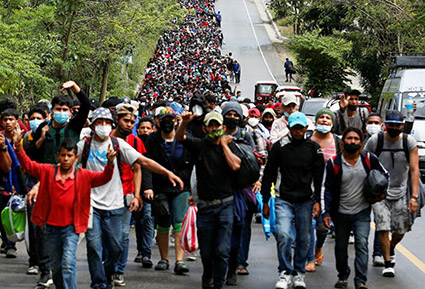 At the U.S.-Mexico border, Joe Biden’s team does not apply the same rules for those crossing the border illegally.

Hundreds of migrants at border cities who have tested positive for covid have been allowed to board buses and make their way into the U.S. interior.

Many more who are not tested are simply dropped off at gas stations or grocery stores and allowed to go on their way, a report said.

“Migrant families coming across the border are testing positive for the coronavirus at between three and 10 times the rate of the U.S. population, according to a Washington Times survey of jurisdictions that are doing the testing,” Stephen Dinan reported for The Washington Times on March 11.

U.S. Immigration and Customs Enforcement (ICE) told The Times that the migrants being processed are testing between 5 percent and 10 percent positive for the virus. In Brownsville, Texas, the city says it is seeing a 12 percent positive rate.

“And in Harlingen, near Brownsville, the homeless shelter where families are being dropped off reported a group at 25 percent positive for Covid-19. That’s more than seven times the current positivity test rate for the U.S. public, which Johns Hopkins University’s tracker shows at 3.5 percent,” Dinan noted.

Thousands of border crossers have been released without any testing, said Sheriff A.J. Louderback in Jackson County, Texas. He said Biden’s team is misleading the public.

“The lying is starting to bother me,” Louderback said. “This whole piece of criminal and irresponsible government needs to be stopped, one way or the other. Either with public pressure or legal means.”

Some of the migrants are being tested for covid by local governments and nonprofits, but not all, the report noted.

“In Cochise County, Arizona, migrants are being dropped at a Texaco, a Walmart and a Safeway. In Yuma County, it was a Jack in the Box restaurant,” Dinan noted.

illegals, immigration, Joe Biden, Migrants bringing covid into U.S. and Biden is doing nothing to stop them, open borders, WorldTribune.com