TV viewers note that there is a lot of that going on in professional sports these days, particularly among the woke NBA which kneels for the Marxist Black Lives Matter. 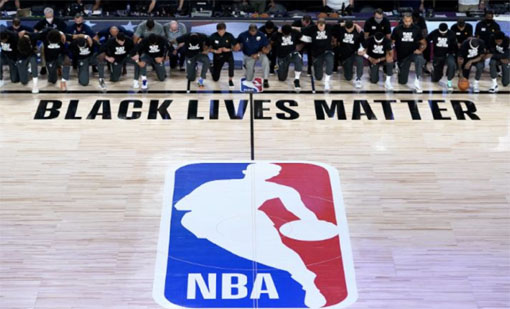 And so they are tuning in to Carlson’s news and opinion show more than the NBA’s social justice warrior show, according to ratings data.

“After nine of the first ten games averaged at least 1.3 million viewers, only three of the subsequent nine have reached that mark,” according to a Sunday report on the NBA’s TV ratings by Sports Media Watch.

During June and July, Fox was “not just the most-watched cable news network, but the highest-rated network in all of television,” according to an Aug. 3 report in Forbes.

“The return of the NBA and MLB after the novel coronavirus hiatus has yet to dent Fox’s momentum, led by primetime ratings powerhouses Carlson and Sean Hannity,” Washington Times reporter Valerie Richardson noted on Aug. 9.

President Donald Trump noted: “I think it’s been horrible for basketball. Look at the basketball ratings. They’re down to very low numbers. People are angry about it. They don’t realize. … They have enough politics with guys like me. They don’t need more as they’re driving down … going up for the shot. They don’t need it. There’s a nastiness about the NBA about the way it was done too. So I think the NBA is in trouble. It’s in big trouble. Bigger trouble than they understand.”

The NBA “is struggling in a big way with their audience right now,” said Fox Sports Radio host Clay Travis, who runs the Outkick the Coverage website, adding, “I think the vast majority of sports fans have no interest whatsoever in social-justice warrior-dom, or politics being mixed with sports.”

Major League Baseball, which saw most players and coaches on all of the teams kneeling for the National Anthem and Black Lives Matter, has also been a ratings disaster since starting its covid-shortened season in stadiums empty of fans. (Opening Day in Washington included one of the worst ceremonial first pitches ever as Dr. Anthony Fauci badly missed the mark in his toss.)

The Athletic’s Ethan Strauss also noted that the numbers continued to fall off for the NBA and MLB: “MLB really fell off after opening day. In general, both leagues aren’t getting the audience one might expect from a nation that’s been deprived of entertainment for months.”

NASCAR viewership has also plummeted in the wake of the motorsport’s catering to Black Lives Matter and the Bubba Wallace fiasco.

But that doesn’t mean TV viewers are tuning out all sports.

Strauss pointed out that the NBA and MLB can’t blame the coronavirus. The virus didn’t stop people from watching Tom Brady hit golf shots with Tiger Woods and Phil Mickelson back in May.

“You could chalk sagging interest up to pandemic conditions, but 5.8 million tuned in to watch Tom Brady hit golf shots into the woods,” Strauss noted.