Mark McCloskey, who said he used his Second Amendment rights to defend his life and home against rioters who threatened violence against he and his family, told Fox News on Monday that he expects to be “indicted shortly.” 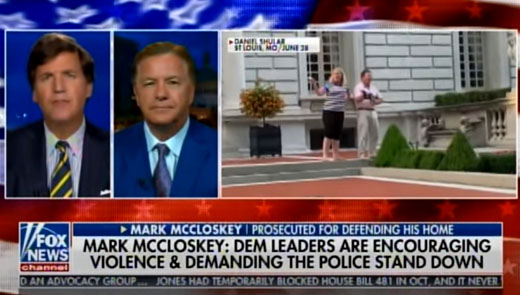 “The traditional media is right behind the mob,” McCloskey told Fox News host Tucker Carlson. “The large crowd of angry people are supporting these entities which are from my understanding Marxist and oppose every thing I stand for and I hold dear.”

“We have gotten tremendous support from ordinary people. My phones [and] my emails are running at about 90 percent positive,” McCloskey said. “We have gotten calls from all over the world. I got a nice letter from a lady in Ireland congratulated us for taking a stand against violence and so I think that the vast majority of Americans wish they could do something. The problem is if nobody stands up and supports them, if the media blasts them, I’m self-employed, I own my own law firm, but what if I was an employee somewhere? If I did what I did and I was an employee of anybody else, I would have been canned the next day. My family would’ve been canned. No one would ever get a job again.”

McCloskey continued: “This is the kind of social pressure that keeps people from standing up and defending themselves and I think it’s time for people to take a different stand. Actually stand up and have some risk. Patrick Henry said, ‘give me liberty or give me death’ and now everybody is so afraid of losing their job.”

On Friday, McCloskey said St. Louis law enforcement officials served a warrant on he and his wife, Patricia, and confiscated the rifle and handgun they used to defend themselves as a mob of Black Lives Matter protesters broke through a gate to their private residence and threatened them.

“The police were really very professional and very nice,” McCloskey said. “The cops that came out to issue the search warrant on us, they were almost apologetic. They didn’t want to have to be there. They were doing their job. Patty wanted to take a picture to document it, and she asked if they wouldn’t mind facing away from the camera so that people wouldn’t get mad at them if their faces were shown on TV.”

McCloskey noted that the police who served the warrant did not believe that he and his wife did anything wrong but the were following the order by St. Louis Circuit Attorney Kimberly Gardner, a Democrat, who claimed that the McCloskeys defending their private property was a “violent assault.”

“My attorney advised me not to be on the show tonight because the rumor is that we are going to be indicted shortly,” McCloskey said. “Having said that, this is the same circuit attorney that released 35 of the protesters that torched and looted in downtown St. Louis but now she wants to indict me. I didn’t shoot anybody. I just held my ground, protecting my house, and I’m sitting here on television tonight instead of dead or putting out the smoldering embers of my home.”