State Rep. Sarah Peake, a Democrat from Provincetown, is sponsoring a bill that would prohibit the sale, distribution and possession of any and all balloons — including party balloons. Each violation would constitute a fine of $100. Hence, if your little 7-year-old is having a birthday party, and you decide to use 20 balloons it will cost you $2,000. Her bill is gathering considerable Democratic support on Beacon Hill. If the public doesn’t rise up (and soon), balloons will be outlawed. 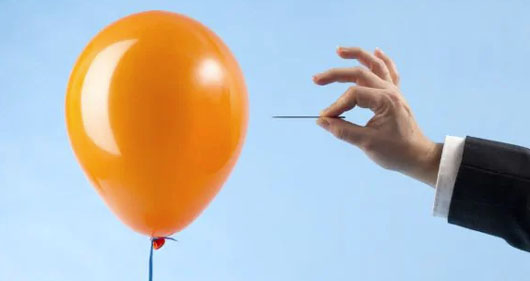 Peake and her fellow Moonbats say the ban is necessary for two reasons: Balloons are deadly to animals and bad for the environment, contributing to “climate change.” It is part of the Left’s larger war on plastic.

And it’s not just balloons. Democrats in the Massachusetts state Legislature are pushing another bill that would ban plastic straws. For example, the legislation stipulates that servers in bars and restaurants would be fined $300 for each occasion they offer a customer a plastic straw. The bill has an exemption for people with disabilities. Yet, they would have to go to a self-service dispensary in the establishment to purchase a plastic straw. In other words, the left’s goal is to make plastic straws — and single-use plastic bags — a thing of the past.

This new prohibition will fail — as the old Prohibition against alcohol failed during the 1920s. Should these outrageous bans become law, a massive black market for balloons and plastic straws will emerge. Rather than getting rid of these products, this legislation will only drive it underground. Moreover, Massachusetts residents will simply go to New Hampshire or Rhode Island (or go online) to get their plastic straws and party balloons. This will only hurt small businesses in the Commonwealth, especially florists and party stores. Jobs will be killed. Livelihoods will be destroyed.

And it will be for nothing. The truth is the Left’s war on plastic is a giant hoax — a fraud being perpetrated upon the American people. Liberals argue balloons, plastic straws and bags need to be eliminated because there is too much plastic being dumped into the world’s oceans. Sea turtles are getting straws stuck in their nostrils; whales are chocking on bags and balloons; and the oceans are allegedly getting filled-up with unlimited tons of plastic. Even if this is true, a ban on balloons and straws is a drop in the bucket — it is inconsequential and ineffective in relation to the scale of the problem. It’s simple common-sense.

When I go to the grocery store, almost everything I buy is contained in plastic. Water, soda, meat, yogurt, milk, laundry detergent, bread, peanut butter, potato chips, toilet paper, vegetables and fruits (which are put in plastic bags), muffins, cereal, cheese, cold cuts — you name it, almost everything that is purchased is encased in some form of plastic. Hence, if liberals really believed that the world is coming to an end in 10 years due to climate change, they wouldn’t be nibbling around the edges with balloons and straws. They would seek to ban all plastic.

Moreover, the United States is not the biggest emitter of plastic pollution — not even close. In fact, we are not in the top 20 countries in the world. The nation that dumps by far the most plastic into the oceans is communist China. It is followed by scores of Asian countries, and major emerging powers such as India and Brazil. America (along with Canada and Western Europe) has one of the cleanest economies. If radical environmentalists have a problem with too much plastic floating around in the oceans, they should take it up with Beijing — and leave the people of Massachusetts alone.

The Green movement’s desire to ban balloons and soda straws is more than simply an attempt to reduce our (high) standard of living and get rid of the everyday conveniences of living in a prosperous, capitalist society. Under the purview of environmentalism and the need to confront the so-called existential threat of climate change, liberals want to use state power to curtail our individual freedoms. It’s not about protecting the environment. It’s about expanding Big Government control at the expense of personal liberties.

The question is: What’s next? If liberals can regulate and outlaw such intimate, personal aspects of our lives, like using balloons at a birthday or anniversary party or preventing us from sipping on a plastic straw with an ice coffee or Diet Coke, then what can’t they ban? The answer is obvious: nothing.