In the end, 218 Democrats voted to remove Greene from the House Education and Labor Committee and the Budget Committee “in light of conduct she has exhibited.” There were 209 Republican votes against. 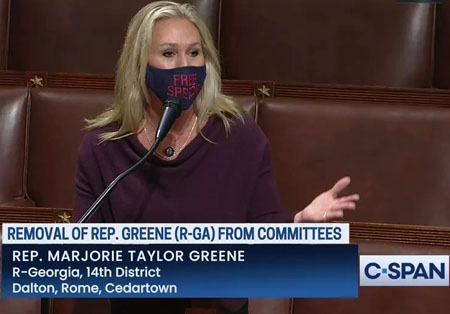 Prior to the vote, Greene took a “go ahead, make my day” approach to the Democrats’ partisan move.

“How stupid they are,” Greene told Washington Examiner columnist Paul Bedard prior to the House Rules Committee vote.

“They don’t even realize they’re helping me. I’m pretty amazed at how dumb they are,” added the Georgia Republican, who said the vote would simply free her up to go on a national tour to help fill the House with conservatives.

“I think Republicans need to get back to who they are, and they need to stop talking and actually doing,” she said. “And [House Minority Leader] Kevin McCarthy and all these leaders, the leadership, and everyone is proving that they are all talk and not about action, and they’re just all about doing business as usual in Washington. And so, what’s the difference between them and the Democrats? There isn’t a difference.”

She raised over $300,000 — $150,000 just yesterday — from over 10,000 donors in her fight against Washington in the past week and won a letter of support signed by key Republican leaders in her district.

“I want to say thank you. My biggest thing I keep saying just non-stop is thank you to the people who are supporting me and all the emails and messages and to the people in my district. I’m proud of my district because this is a place in Georgia and a beautiful place in this country where Americans love their freedoms, and they’re fed up. And they aren’t willing to back down from a fight like these losers in Washington,” Greene said.

House Speaker Nancy Pelosi said on Thursday that she has no concerns about the precedent the Greene vote could set: “None, not at all. Not at all. If any of our members threatened the safety of other members we’d be the first ones to take them off of a committee. That’s it.”

Arizona Republican Rep. Andy Biggs tweeted: “If anyone thinks that the Democrats’ unprecedented actions to remove Rep Marjorie Taylor Greene from her committee will be limited just to her, they are sadly mistaken. Democrats are attempting to silence many public officials, abusing their delegated power time after time.”

On Monday, Senate Minority Leader Mitch McConnell had referred to Greene as a “cancer for the Republican Party.”

“Somebody who’s suggested that perhaps no airplane hit the Pentagon on 9/11, that horrifying school shootings were pre-staged, and that the Clintons crashed JFK Jr.’s airplane is not living in reality,” McConnell said in a statement first shared with The Hill. “This has nothing to do with the challenges facing American families or the robust debates on substance that can strengthen our party.”

Greene responded: “The real cancer for the Republican Party is weak Republicans who only know how to lose gracefully. This is why we are losing our country.”

California Republican Rep. Devin Nunes said in an interview with Newsmax TV on Tuesday: “Who are we to speak for the people who elected – the duly elected Ms. Greene? She won a primary, a very tough primary, she got elected. And I would say this, if we’re going to begin this process of expelling members based on things they said in the past and just because they don’t like someone, and on things they said in the past, I can tell you there are many Democrats who said very unsavory things, especially anti-Semitic things have been said.”