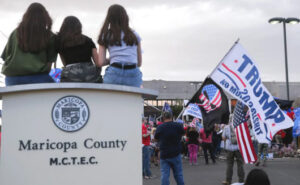 Maricopa County in Arizona will carry out a comprehensive forensic audit of its voting systems to allay concerns raised by some constituents about the integrity of the November 2020 election. The Maricopa County Board of Supervisors voted unanimously at a meeting Wednesday to hire two independent companies to conduct an audit that will probe whether voting machines counted votes correctly, and whether they were tampered with or hacked in any way.

The Republican-dominated board defended the accuracy of the county’s election results while expressing hope that a comprehensive equipment and software audit would dispel concerns that the results were inaccurate. “Maricopa County elections were administered with integrity throughout 2020. That’s a fact. Multiple audits to date have proved as much, and multiple court rulings have concurred,” Chairman Jack Sellers said in a statement.

“It’s also true that a significant number of voters want the additional assurance that a full forensic audit of tabulation equipment might bring, especially given all the misinformation that spread following the November 3 election.” …

Arizona State Sen. Warren Peterson, a Republican who chairs the Judiciary Committee, told Fox 10 that the county’s audit will not alleviate the need for a Senate audit. “A county audit will not prevent the Senate from doing their own audit,” Peterson told the outlet. “My concern with the county audit is that the scope of the audit is an inch deep. With the limited scope, they have asked to be audited, they are guaranteed to find nothing.” The Maricopa County board has resisted the Senate’s requests, arguing that they were too broad, while trying to negotiate a settlement.