It’s not easy to amuse those who have no sense of humor. Especially those who understand Freedom of the Press to mean always both pleasing their employers and also colluding with one of the two major U.S. political parties.

As the corporate media freaked out over an obviously joke photoshopped image of the hero dog from the al-Baghdadi raid, the Medal of Honor winner in the original photo was laughing. He got it — they didn’t. Or couldn’t because of where the joke originated from. 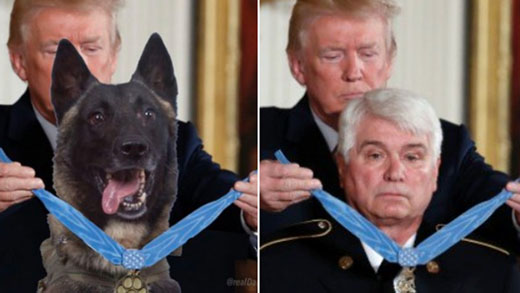 Trump set the twitterverse on fire on Oct. 30 when he posted a photo depicting him honoring the hero dog who chased Islamic State (ISIS) leader Abu Bakr al-Baghdadi into a tunnel, leading to the terrorist detonating his own explosive vest.

The president tweeted: “AMERICAN HERO!” and attached a clearly photoshopped image of his awarding a bronze paw medal to the dog. The image was reportedly created by The Daily Wire.

The original image depicts Trump presenting the Medal of Honor to James C. McCloughan who as an Army medic in Vietnam was credited with saving the lives of 10 men.

Not surprisingly, the corporate media had a meltdown, accusing Trump of disrespecting McCloughan.

Steve Herman, White House bureau chief for Voice of America, tweeted: “I’ve requested details from the @WhiteHouse on this photo. There was no such canine event on today’s @POTUS schedule but there is a Medal of Honor ceremony set here for later today for an active duty Green Beret.” Herman later confirmed what everyone who doesn’t suffer from Trump Derangement Syndrome already knew, that, in fact, the dog photo was a photoshopped image.

New York Times contributor Brendan Nyhan tweeted: “What a way to treat a war hero. Also, look forward to the tick tock about how much time Trump spends asking about the dog and how much executive branch effort is being made to get the dog to the White House.”

It seems Nyhan, as well as CNN personality Jim Acosta, had to be reassured that, even though the photo was obviously not real, the dog was not receiving the medal. Acosta tweeted: “A WH official said ‘the dog is not at the WH.’ ”

Matt Armstrong, who says he writes on public diplomacy and political warfare, tweeted: “This is incredible. It is despicable. Additional words fail me.”

Jeryl Bier, a freelancer, asked: “Wonder how James McCloughan feels about this…?”

McCloughan, who had not seen the image before a reporter sent it to him, said in an Oct. 30 interview that he was not offended and laughed when he compared the two images.

McCloughan added that canines have long been part of war efforts and the photo “recognizes the dog is part of that team of brave people.”

WWMT reporter Mike Krafcik also spoke to McCloughan, who reiterated that he takes no offense: “I’m not offended by another hero,” McCloughan stated.

Trump, meanwhile, said the hero dog, named Conan, is in the Middle East being treated for injuries suffered in the al-Baghdadi raid and will be back in the U.S. next week.

Trump on Oct. 31 re-tweeted the photoshopped image, writing: “Thank you Daily Wire. Very cute recreation, but the “live” version of Conan will be leaving the Middle East for the White House sometime next week!”