Just 13 percent of Americans say they have “a great deal” of confidence in what radio, TV, newspapers, and news websites are reporting, according to a new Gallup survey. 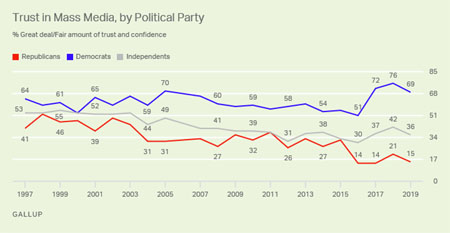 Only 15 percent of Republicans and 36 percent of independents in the poll said they had at least a fair amount of trust in the media.

A large majority of Democrats (69 percent), on the other hand, trusts the media in the Trump era, where leftist corporate media outlets pummel the president on a 24/7 basis.

Gallup first measured trust in the mass media in a 1972 survey when 68 percent of Americans said they trusted it. Similar levels were recorded in 1974 (69 percent) and 1976 (72 percent), but two decades later, when Gallup next asked the question, trust had fallen to 53 percent.

In the new poll, overall, 13 percent said they have a great deal of trust in the media, 28 percent a fair amount, 30 percent not very much and 28 percent none at all.

“Republicans became increasingly mistrustful of the media in 2016 when Trump was campaigning for president and was sharply critical of the media’s coverage of him,” Gallup said.