A U.S. Postal Service mail carrier was charged with attempted fraud for allegedly tampering with requests for vote-by-mail absentee ballots, federal and state prosecutors in West Virginia announced on Tuesday. 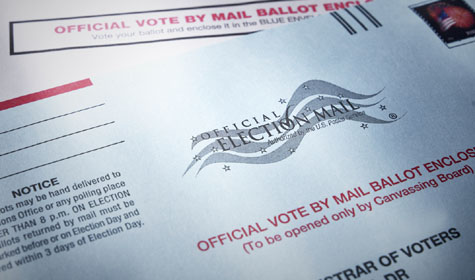 “Manipulating one’s absentee ballot or application is not a laughing matter – it’s a federal offense,” Morrisey said. “We must protect the integrity of the ballot box, and this demonstrates the aggressive action we will take to do so. It is more important now than ever for voters to watch for unexplained or suspicious marks and/or any other irregularity with their ballot. If something looks suspicious, let us know right away.”

The affidavit states Cooper accessed the ballot requests through his employment as a rural mail carrier. He was responsible for mail delivery in the three towns from which the tampered requests were mailed – Onego, Riverton and Franklin.

According to the affidavit, Cooper admitted to altering some of the requests.

The announcement in West Virginia came at about the same time that Twitter assigned a fact check warning to President Donald Trump for his claims that voting by mail was susceptible to fraud.

Last month, Trump noted that “There is a lot of dishonesty going on with mail-in voting.”

The major media immediately went into outrage mode. A CNN “fact check” declared that Trump “opened a new front in his campaign of lies about voter fraud.” A New York Times headline asserted: “Trump Is Pushing a False Argument on Vote-by-Mail Fraud.” Both claim that voter fraud is essentially nonexistent.

“Citizens who vote at home, at nursing homes, at the workplace, or in church are more susceptible to pressure, overt and subtle, or to intimidation,” the commission’s report said. “Vote buying schemes are far more difficult to detect when citizens vote by mail.”

The report cited as an example the 1997 Miami mayoral election that resulted in 36 arrests for absentee-ballot fraud. The election had to be rerun, and the result was reversed.

Lott cited a 2017 investigation of a Dallas City Council election which found some 700 fraudulent mail-in ballots signed by the same witness using a fake name. “The discovery left two council races in limbo, and the fraud was much larger than the vote differential in one of those races. The case resulted in a criminal conviction,” Lott noted.

In a 2018 North Carolina congressional race, Republican Mark Harris edged out Democrat Dan McCready by 905 votes. But election officials became suspicious when they discovered that the Republican received 61 percent of mail-in votes, even though registered Republicans accounted for only 19 percent of those who had requested mail-in ballots.

Lott noted: “A Republican operative, L. McCrae Dowless Jr., had allegedly requested more than 1,200 absentee ballots on voters’ behalf and then collected the ballots from voters’ homes when they were mailed out. Mr. Dowless’s assistants testified that they were directed to forge voters’ signatures and fill in votes. A new election was required, but Mr. Harris didn’t run. Mr. Dowless faces criminal charges for absentee-ballot fraud in both the 2016 and 2018 elections and has pled not guilty.”

“Mail-in voting is a throwback to the dark old days of vote-buying and fraud,” Lott wrote. “Because of this, many countries don’t allow absentee ballots for citizens living in their country, including Norway and Mexico. Americans deserve a more trustworthy system.”