As multinational corporations get bigger, the propaganda gets more brazen.

International beer goliath Heineken, the second-largest brewer in the world, is being pilloried in England for releasing a new commercial that serves as an advertisement for vaccine passports.

The ad depicts “a nightclub full of older people, with the slogan: ‘The night belongs to the vaccinated, time to join them,’” UK newspaper The Telegraph reports.

It can be seen in full here:

Cheers to the vaccinated. Time to join them. #FreshBeginnings pic.twitter.com/uKeYOWKuEH

Conservative British Members of Parliament lambasted the company for celebrating private corporate coercion on the coronavirus vaccine. And with good reason. “Vaccine passports could be introduced [in England] by the autumn, [London newspaper] The Times reported a Downing Street source as saying” on July 10, The Telegraph noted.

“Heineken really ought to consider whether they’re discriminating against loyal customers who maybe cannot be vaccinated for medical or other reasons,” David Jones, a Conservative former cabinet minister, said of the new ad. 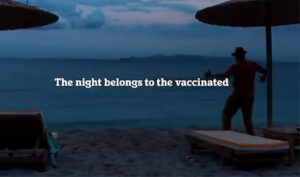 “The Government does say that private companies can impose their own rules but I think it’s really discriminatory and there are lots of people who can’t be vaccinated, and it’s quite wrong they should not be able to go into a pub and have a drink.”

Well, not really if you take a look at Heineken’s long record of support for corrosive globalist causes.

WorldTribune’s Corporate Watch in September 2019 presented an extensive listing of the corporation’s personally-involved financial support for the floodtide of Third World refugees into Europe and other pro-mass immigration efforts, as well as its backing of global feminist campaigns that are now being especially stressed in the Biden administration.

As we noted at the time:

In a 2017 ad campaign, the company plastered the following message on its beer bottles:

“Here’s to an Open World: To a world without borders or barriers. To the belief that there’s more that unites us than divides us. To finding common ground. So raise a bottle with the person next to you. Because a stranger is just a friend you haven’t had a cold Heineken with yet. Open your world.”

Children are being used as pawns to help illegal aliens get into America. For years Federico Reyes was listed as a member of the Board of Directors for a group called the Safe Passage Project while he was Corporate Controller for Heineken USA. Reyes is still a member of the board for the SPP, though he has left Heineken for another company.

“When Safe Passage Project encounters children in removal [deportation] proceedings, the core of our work is terminating those proceedings by securing some form of legal status for the child. One form of relief is asylum,” the organization’s 2015 annual report reads.

Under the “What We Do” heading on its website, the group declares, “We provide free lawyers to immigrant and refugee children who are being deported.”

Thanks to the exploitation of outdated border security procedures, children have now become valuable currency for those seeking to cross our border. “They know that if they come across with children, there’s a very high probability that they’re gonna be released within a few days and then set free into the general public,” U.S. Border Patrol Spokesman Joe Romero explained earlier this year. “And so this is why children are being used, including children who have no desire to be here.”

And then there is this:

Heineken also shares a commitment to the global feminist agenda championed by former first lady Hillary Clinton for the past 25+ years. The company has publicly toasted its “partnership” with Vital Voices, a global women’s organization with extensive ties to Hillary.

An article posted on the Network of Executive Women website afterwards titled “The Top 5 WOW Moments from Forum” shows just what “gender equality” means in the globalist mindset. “Inclusive Leadership Expert” Daisy Auger-Dominguez‘s address was listed as the No. 1 moment.

When she is not teaching corporations how to be more “equitable and inclusive” Auger-Dominguez is a member of the Board of Directors for abortion retail giant the Planned Parenthood Federation of America.

If not wanting to support Heineken’s progressive globalist agenda is not enough, there are also excellent personal health reasons to swear off what it is selling:

Mass-produced beer is flavorless swill filled with unhealthy additives such as high fructose corn syrup, monosodium glutamate (MSG) and toxic dyes and preservatives. It’s an adulterated product that is the beer-drinking equivalent of eating at Taco Bell or McDonald’s.

Heineken is a huge multinational operation but a list of brands on its website is rather sparse. Besides its namesake beverage, other popular beers owned by the company include Amstel, Lagunitas and Sol.

Corporations such as Heineken feel bulletproof as to the extent they can go to alienate their own customers. Providing a platform for the foreign invasion of the West has now mushroomed to lionizing punitive measures against those who do not want to take an experimental vaccine with serious health concerns surrounding it. There is only one word for this behavior: inimical.

It’s not going to stop until the people Heineken is bullying cease giving it their money.