Lt. Gen. Flynn: ‘There are orders that an officer can refuse’

As calls increased for top U.S. military leaders to resign over the Afghanistan disaster, Lt. Gen. Michael Flynn noted that “there are orders that an officer can refuse.”

“Those orders must be unethical, immoral or illegal,” Flynn noted in a post to Telegram.

Flynn said that “leaving even one American citizen behind to the likes of the Taliban, not to mention hundreds, represents all three” of the conditions in which an officer can refuse an order.

“From the 82nd Airborne Division Commander, to the Central Command Commander, all the way up to the POTUS (who is clearly not making any decisions), the decision to leave Americans in Afghanistan high and dry is immoral, unethical and illegal. Not one citizen should have been left behind. God help these people,” Flynn wrote.

Meanwhile, a group of 90 retired Flag Officers is calling on Defense Secretary Lloyd Austin and Chairman of the Joint Chiefs of Staff Gen. Mark Milley to resign over the “disastrous” U.S. withdrawal from Afghanistan.

“The retired Flag Officers signing this letter are calling for the resignation and retirement of the Secretary of Defense (SECDEF) and the Chairman of the Joint Chiefs of Staff (CJCS) based on negligence in performing their duties primarily involving events surrounding the disastrous withdrawal from Afghanistan,” Flag Officers 4 America, the retired top-ranking military officials, wrote in an open letter released on Monday.

Team Biden, Flynn continued, didn’t “depart” Afghanistan, it “surrendered to the Taliban” and left “American citizens to fend for themselves at the hands of the Taliban.”

As former U.S. military decision makers, the Flag Officers who signed the letter said current military brass should not have rushed the withdrawal and should never have abandoned the Bagram Air Base.

“As principal military advisors to the CINC (Commander in Chief)/President, the SECDEF and CJCS should have recommended against this dangerous withdrawal in the strongest possible terms,” the Flag Officers wrote. “If they did not do everything within their authority to stop the hasty withdrawal, they should resign.”

The Flag Officers stressed that if Austin and Milley did advise against the hasty withdrawal, they should have resigned if Joe Biden didn’t take their direction.

“[I]f they did do everything within their ability to persuade the CINC/President to not hastily exit the country without ensuring the safety of our citizens and Afghans loyal to America, then they should have resigned in protest as a matter of conscience and public statement,” the letter states.

The Pentagon announced on Monday afternoon that all U.S. forces left Afghanistan – a day before Biden’s deadline for a total troop withdrawal. 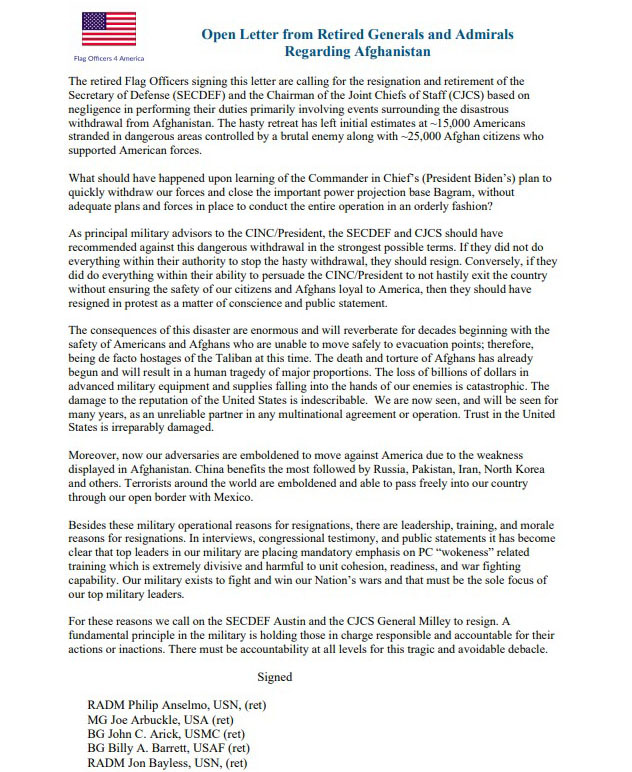 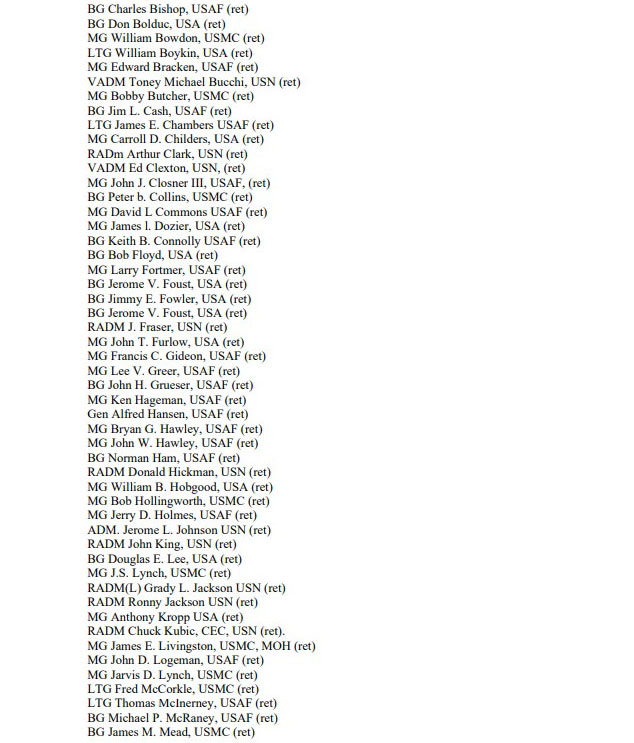 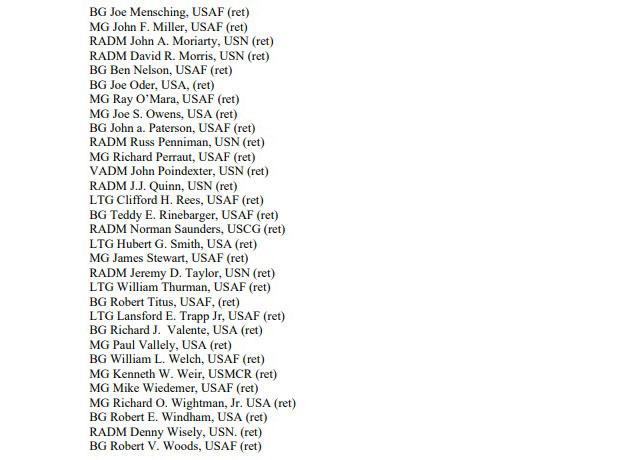 Lloyd Austin, Lt. Gen. Flynn: ‘There are orders that an officer can refuse’, Mark Milley, WorldTribune.com