A federal judge ruled on Friday that a Louisiana high school senior can have a portrait of President Donald Trump painted on his school parking space. 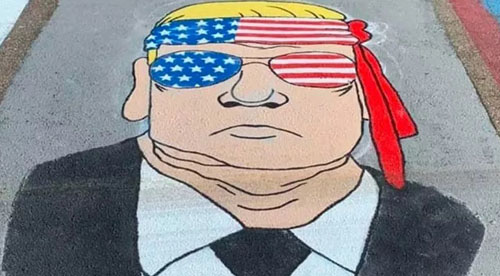 Pine Junior-Senior High School near Franklinton allowed seniors to paint their assigned parking spaces for a $25 fee. Student Ned Thomas chose to have a portrait of Trump painted in his space.

But Superintendent Frances Varnado, with the school board’s approval, reportedly had the image painted over, saying it was too political, and that she was concerned it would “cause further division and disruption among students.”

Thomas’s parents filed a federal lawsuit. U.S. District Judge Eldon Fallon on Friday ruled in their favor on First Amendment grounds, writing: “The painting of President Trump cannot reasonably be described as obscene or plainly offensive on its face, nor can it be construed as school-sponsored speech.”

Thomas said his friend, who painted the Trump portrait for $200, would come back and fix the image.

“It’s not anything obscene or absurd or anything to that extent, it’s just a picture of the president of the United States,” Thomas said.

A similar situation occurred at Lubbock-Cooper High School in Texas where students said pro-Trump messages on their parking spaces, which had been approved by the school, had been vandalized.

At least 11 spots were vandalized. All of them had a Trump theme, KCBD 11 News reported.

A parent of one of the students said: “My son and several of his friends spent over $750 painting their parking spots. They spent eight hours creating this. Their spaces have been completely vandalized and all boys have been threatened.”

Officials with Lubbock-Cooper High School say the district will seek to prosecute any individual responsible for destroying or defacing school property.