Covid-19 changed everything.  Our Lives, our Health, the Economy, the Election, and certainly our Future.

While the pandemic presents an enduring challenge to the world, events nonetheless move forward shrouded by the continuing health emergency and jolted by lethal socio/economic ramifications. Now, nearly one year into suffering from the Wuhan virus, we enter a new year with trepidation but with guarded optimism that we may be on the verge of conquering Covid.

UN Secretary General Antonio Guterres called 2020 a year of “trials, tragedies and tears.” He called for 2021 to be a “Year of Healing.”

Yet the world moves on and we inherit the static violent conflicts in places like Syria, Yemen and Libya. We see escalating ethnic fighting in Ethiopia and the Sub-Saharan Sahel region. 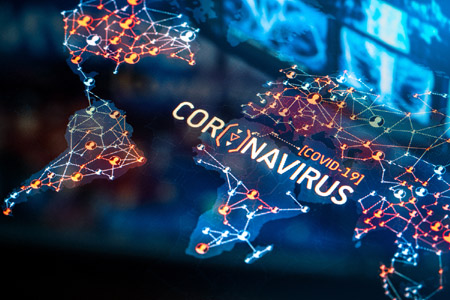 China: Will we see Deja vu all over again with a more accommodating presumptive Biden Administration?

The People’s Republic presents the U.S. with both an economic and strategic challenge; the Trump Administration notably confronted communist China over its trading and technology theft practices.  But will a Biden team who views Beijing as an economic and military competitor return U.S. policy towards China with a debatable “Reset” or Measured Skepticism? Word has it that Biden’s advisors want better ties and are suggesting American cooperation with China’s Space Program among other things! (What planet are we on??).

Hong Kong:  Hong’s Kong’s status has proven a political and security barometer on Beijing’s intentions, both to the former British Crown Colony as much as a warning to free and democratic Taiwan. By suppressing civil and political rights in Hong Kong, the People’s Republic glaringly shows its true colors and signals the rules of the game for Taiwan and the disputed South China Sea.

Significantly, France and Poland among others are pushing back against a European Union-China investment agreement.

Iran/The Persian Puzzle:  To Confront, Coerce or Coexist?  The seemingly perpetual crisis with the Islamic Republic of Iran has now gone on forty years and outlasted seven American presidents.  An incompetent and corrupt theocratic regime still rules Iran.  Nonetheless, a Biden Administration would eagerly pursue a return to the flawed 2015 Iran Nuclear Deal, possibly before Iran’s presidential elections in June.

Korean Peninsula:  Joe Biden’s first security challenge [if actually inaugurated as U.S. president on Jan. 20] would be North Korea, whose mercurial leader Kim Jong-Un was neutralized by Donald’s Trump’s epic showdown in 2017.   Though North Korea has refrained from testing nuclear weapons or long-range missiles since the Trump deal, expect Pyongyang to test the waters with Washington. In the showdown, the U.S. will not likely pay enough attention to Japan a key and reliable ally in a bid to play the China card in presumably solving North Korea’s nuclear threat.

WHO:  Why reward the World Health Organization (WHO) for failing to sound the virus alarm in time?  Plans by Team Biden to return the USA to WHO membership are rooted in feel good emotions and global hand holding rather than critical analysis.  Refrain from rejoining until WHO shares credible, verifiable and transparent medical information from inside China to see what really happened in Wuhan.

Vaccine Diplomacy.  The USA the Europeans and Latin America are distributing the vaccines.  Europe remains in lockdown and has had nearly as many fatalities as the U.S.

BREXIT: Britain’s seemingly endless BREXIT battle is over; Prime Minister Boris Johnson finally got a trade deal with the European Union for a less than bitter break.

Jobama 3? The presumptive Biden Administration heralds Back to Business as usual with a team of Washington Insiders who reflect the status quo, especially in dealing with China and Iran.

Joe Biden would inherit an economy which after the Covid shock has begun to rebound. Unemployment has dropped dramatically but we need prudent policy to keep economic growth alive.  Yet poor policies on the state level in places like California and New York have hobbled growth and destroyed small business through a series of unpredictable policy swings.

The Emotional and economic stress of shutdowns and the ensuring economic disaster are yet to be fully comprehended.  We need normalcy not lockdowns and edicts.

The world has starkly changed.  Have a HEALTHY and Happy New Year!

Looking ahead to 2021; A post-pandemic world?, WorldTribune.com