Lock him up: Former FBI director is no boy scout

James Comey is the worst FBI director in U.S. history. He not only ran the agency into the ground, badly damaging its reputation and credibility. But more importantly, during his tenure Comey committed numerous crimes. He belongs in jail. The fact that he is engaged in a lucrative book tour is not just revolting. It is insulting.

In his book, “No Higher Loyalty,” Comey seeks to portray himself as the last Boy Scout in Washington. Everyone else is an opportunist and a grafter; Comey, however, is a courageous straight-shooter, an honest man simply trying to pursue truth and justice. This portrait is more than self-serving and cynical. It is a blatant lie — one of many that Comey keeps peddling in his desperate desire to bring down President Trump. In the book, Comey makes clear what we already knew: He hates Trump. The former FBI director compares the president to a mob boss, and says Trump is “morally unfit” to occupy the White House. 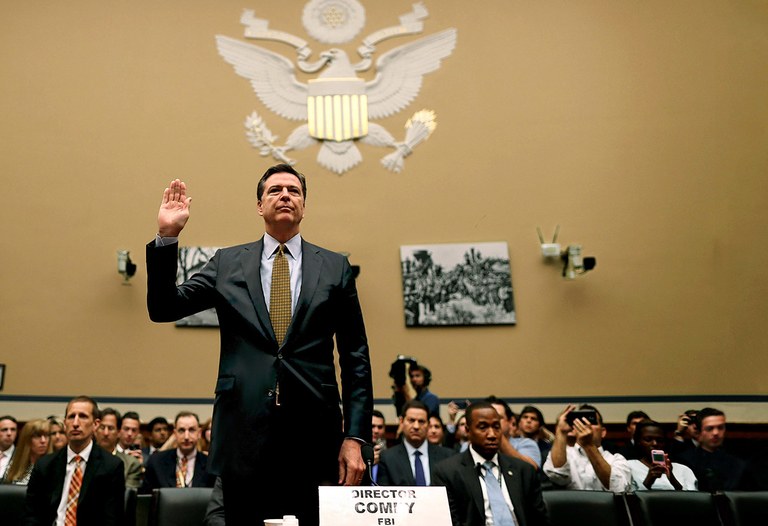 Yet, the real thug is Comey. The Justice Department’s release of the Comey memos casts him in a very negative light and exposes his many lies and untruths. For example, in one of his memos, Comey says that he told the president, “I do not leak. I don’t do weasel moves.” By his own admission, however, Comey has confessed that he did leak several memos of his private conversations with Trump to a close friend and Columbia University professor, Daniel Richman. The goal: To get the information to the New York Times in order to trigger the appointment of a special counsel, his long-time friend and colleague Robert Mueller. Mission accomplished.

Comey has proven — beyond the shadow of a doubt — that he is a liar and a leaker. The problem, however, is that his leaks may now land him in prison. Two of the memos he leaked to Richman contained classified information. This is a crime, punishable by up to ten years in prison. In fact, compromising classified, sensitive information is exactly what Hillary Clinton did as secretary of state though her private e-mail server. Hence, the irony is that Comey has committed the very crimes he exonerated Hillary for. You can’t make this up.

Comey’s book tour has degenerated into a circus-clown show. His palpable hatred for Trump shows that the president was right to fire him. Comey was not an impartial, non-partisan G-man, but a political hack, who was part of the anti-Trump resistance. He allowed the FBI to become politicized and corrupted under the Obama administration, transforming the agency into a partisan cudgel to hammer Trump and break his presidency.

It was Comey who engaged in countless (illegal) leaks to the media, seeking to paint Trump as an agent of Vladimir Putin. It was Comey who authorized his number two, Andrew McCabe, and other senior FBI officials to leak to select liberal news outlets as part of their campaign to humiliate and delegitimize the president. It was Comey who disseminated the false and salacious Christopher Steele dossier throughout the deep state in order to frame Trump as a secret Kremlin mole, helping to push the bogus — and highly conspiratorial — narrative of Russian collusion. It was Comey who turned the FBI into an extension of the Hillary campaign, signing off on the false FISA warrants that enabled the surveillance of then-candidate Trump and his inner circle during the election. And when Trump confronted his then-FBI director in early 2017 about all of this, Comey did what he does best: He lied.

Comey is the consummate swamp creature — vile, opportunistic, two-faced and mendacious. Only in America can someone be so incompetent and corrupt and still land a lucrative book deal. No wonder the mainstream media is deifying him. Comey is one of them, a rabid Never Trumper, who will say and do anything to bring down the president. In fact, the most chilling comment in Comey’s book is his claim that the FBI’s job is to rein in and “control” the commander-in-chief. It should be the other way around: The president is supposed to keep the FBI in check and prevent abuses of power.

Comey is championing a national surveillance state, a permanent shadow government whose leaders are above the law, the constitution and representative democracy. He is a dangerous megalomaniac, who ran a rogue agency in the service of the Democratic Party — especially, Obama and Hillary. It is no surprise that his senior agents, such as McCabe and Peter Strzok, rigged the FBI’s investigation into Hillary’s emails.

Trump was not only right to fire Comey. But he should go one step further: Order Attorney General Jeff Sessions to indict the former FBI boss. It’s time to lock him up.

Jeff Kuhner, Lock him up: Former FBI director is no boy scout, WorldTribune.com