In his July 13 radio broadcast Rush Limbaugh, a former NFL Monday Night Football analyst, noted that the Washington Redskins “are no more.” 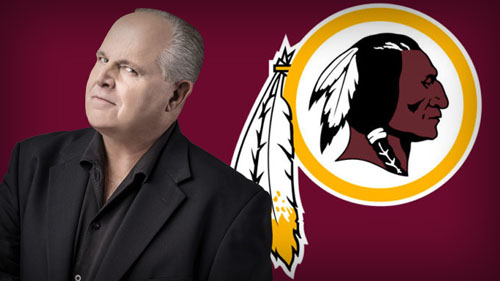 “They have gotten a lot in the last 10 years culturally, and they’re not happy. They’re angrier than ever. I told you last Monday it’s not gonna make Colin Kaepernick happy if they get rid of the name Redskins. All it’s gonna do, ‘Okay. Chiefs are next, then the Cleveland Indians, then the Braves.’ It doesn’t stop anything. It doesn’t satisfy them.”

Limbaugh played a sound bite of NBA hall of famer and current analyst Charles Barkley “talking about all of this stuff going on in professional sports, this social justice stuff, such as the NBA permitting its players to use social justice slogans on their jerseys instead of their names. And of course what did I say about that, folks? They’re going the wrong way. The NBA’s going the wrong way. The NFL is going the wrong way. People are not gonna tune in to watch. They don’t want to watch players kneel, led by coaches kneeling in protest of the national anthem, especially after playing something called the African-American national anthem where there isn’t any protests.”

Limbaugh continued: “If the NFL thinks that this is where its fan base is, and they can’t possibly, they have to know this is not where the fan base is, but they have made up their minds that the money from Nike and other sponsors is more important, especially since fans aren’t gonna be permitted in the stadium, then who needs fans? All we gotta do is hope they watch on TV. And maybe go out and spend some sucker money on jerseys and licensed merchandise.

“It’s like Jason Whitlock said. They’re lining up and signing up behind Black Lives Matter, which anybody can learn in five seconds on the Internet is a Marxist organization, not civil rights. And the NFL is announcing that they are not who we always thought they were. Not only that, but sports is this place where people go to get away from this kind of stuff, for two or three hours at a time it’s the place where you go to escape.”

Limbaugh then played the sound bite from Barkley, who said: “The media, they’re gonna spend all their time on what’s on somebody’s jersey, and what’s on the buses, and who’s kneeling and who’s not kneeling. My concern is turning this thing into a circus instead of trying to do some good stuff. Obviously, we are in a divided country and sports used to be a place where fans could go and get away from reality. The fans are at such a disadvantage because they’re going through the pandemic and they don’t want to see a bunch of rich people talking about stuff all the time.”

Limbaugh noted: “Yep. Don’t want to see a bunch of rich people whining and moaning. How did you get rich if there’s all this injustice, if there’s all of this systemic this and systemic that, how does the rest of this stuff happen?”

Limbaugh continued: “By the way, one more thing about the Redskins changing the name. You know what’s gonna happen now? When the Redskins come up with a new name, when they announce whatever the new name’s gonna be, the next thing is gonna be massive lawsuits demanding reparations for past damages to the community. And they’re gonna use this as evidence. They’re gonna say, ‘The Redskins, Dan Snyder, the NFL, they knew all along what they were doing.’