President Donald Trump “may be saving America from a fate you and I don’t want to contemplate,” radio host Rush Limbaugh said. 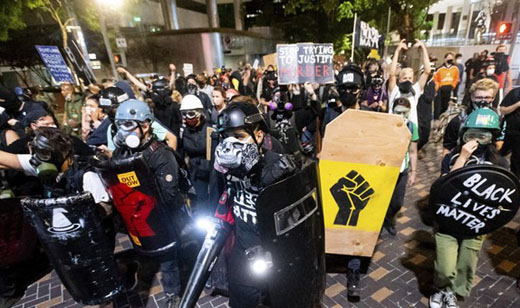 “I believe the Democrat Party – Joe Biden, Kamala Harris, whoever – I think they are attempting, and have been for a while, to literally foment a race war. I think that has been the objective,” Limbaugh said.

“Trump is not just running for re-election. There’s so much more going on here. The story that the president told at the Republican National Convention – and believe me, it was his story, and it was well assembled. It was brilliantly conceived, flawlessly executed by virtually everybody who had a role in it. The story he was telling is about saving this country from the race war that I firmly believe the Left is attempting to foment.”

Democrats “have been throwing so much hate at Donald Trump that they have been goading him into responding with his own version of hate,” Limbaugh said. “And that is where Trump has been brilliant. He has not responded in kind. He has not responded with hate. They have ladled it on. They have just hammered hate at him, hoping that he will hammer hate back at them. You look at that Republican convention, there wasn’t any hate. You couldn’t find a shred of it. All you found was love, appreciation. You found one of the most diverse political conventions I have ever seen, one that was uplifting to me.”

Limbaugh continued: “The Left in this country – it’s patently obvious now – they want this election to be, they want the current American circumstance to be black versus white, not left versus right, not male versus female, not straight versus gay. They want it to be black versus white. Immigrant versus native maybe, but as long as it has a racial component, that’s what the Democrats are attempting to foment. And Trump didn’t buy it. He didn’t buy into it. He didn’t take the bait. He didn’t respond in kind. All last week the president made clear that it’s about people who are constructive, who are productive and generally happy. That’s us. Versus people who are – let’s face it – miserably unhappy.

“I don’t care what you think, I don’t care what they say. Black Lives Matter, Antifa, they are not happy people, and they’re not capable of happiness. They’re not capable of laughter. The closest they get to happiness is when they murder a Trump supporter as happened in Portland. The closest they get to happiness – it’s a phony happiness, obviously – is when they engage in the destruction of private property and general mayhem. But that’s not the kind of thing that normal people are made happy by. But this is who we’re dealing with. People who are destructive, miserably unhappy, parasitic.”

“The Democrat Party is the biggest hate group in America today, and Trump met it all last week with love,” Limbaugh added.

“I think the Democrats are now so frustrated, they’ve had to come out and admit there’s rioting and looting in their states. Now they’re trying to blame Trump for that,” he said.

Trump has the Democrats “doing things that are self-destructive, and they don’t see it because of their arrogance because their belief in their intellectual superiority, particularly over Trump. You know, normally the Democrats hide their true agenda. … Recently, they’ve gotten brave, and they have been up front a little bit more so than usual about their agenda, but normally they camouflage it. Normally they hide it. Today and the past few months, not only are they not hiding it, they are putting it into action – in Portland, in Minneapolis, in Seattle, in Chicago, in St. Louis,” Limbaugh said.

“They are actually putting the agenda into action, on television, for everybody to see every day. I don’t care, folks; Americans do not want this country to become Portland or Seattle or Minneapolis or anywhere else the Democrats are running states and cities. They are destroying their own cities. It’s on television, and all the while they believe they’re destroying Donald Trump. He’s driving them crazy because he simply isn’t who they think he is – and they’re so lazy, they haven’t taken the time to find out who he actually is.”