Limbaugh blast: ‘Not over … Was not an investigation … Never any evidence of collusion’

Democrats and the “Drive-By Media” have no intention of dropping Trump-Russia collusion because they “have created a monster that believes and absorbs and needs fake news like vampires need your blood,” radio host Rush Limbaugh said on Fox News’ Hannity on March 28.

“And these people are believing now that there is evidence of collusion in the Mueller report and that (Attorney General William) Barr is not telling the truth! And the New York Times is leading this effort.” 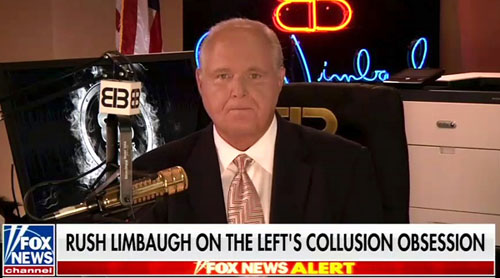 “It is not over! It is still happening,” Limbaugh told host Sean Hannity. “The Democrat Party and the media and all of these people from the Obama administration who ran this scandal are still running it. The objective remains to get Donald Trump out of office either by driving his numbers down or impeaching him or defeating him in 2020.”

Limbaugh continued: “Today the New York Times has this story that the Mueller report is 300 pages and the Barr summary is four pages. Therefore, Barr is lying. Pelosi literally said that we cannot trust the attorney general. So what we’re being led to believe by these people – remember, they have to feed their beast with this fake news constantly.

“The rest of the Drive-By Media is gonna pick it up because it prolongs the narrative that Trump is unworthy, that Trump cheated, that we need to redo the election results of 2016. So we’re being led to believe that this report does contain evidence of collusion. Barr’s lying about it. Now, this is so silly. If it contains evidence of collusion then where is Mueller on television every night saying, ‘Wait a minute, wait a minute, that’s not what my report says. My report has plenty of evidence of collusion. I have all these anti-Hillary people on my staff and we found all kinds of evidence and Barr is lying.’ Why isn’t Mueller doing that if Barr is lying in the report?”

Limbaugh continued: “It’s not going to stop. The media – I mean, look at this. I told this story on the radio today. If I had lied to my audience for two years that I knew Hillary Clinton was being investigated, I had sources and that she was going down and that she was gonna be locked up, ‘You can count on me. You can believe me. I’m hearing it from people that I trust, it is gonna happen.’

“This exact thing has happened from MSNBC, to CNN, to the New York Times, to the Washington Post. They’re lying to everybody, and their audiences don’t seem to care! ‘Just give us more fake news!’ They want it. They can’t accept that it’s not true. They can’t accept that Donald Trump is not a traitor. They’re not happy to learn that their president is not a foreign agent. They’re unhappy. We’re dealing with deranged people who are not rational. We can’t deal with them rationally.”

Limbaugh continued: “We have got to get to the bottom of this. We’ve got to have people named. They have to be held accountable. If jail time is called for, they need to go to jail. They knowingly lied to the American people. The media were willingly complicit in this. They were not fooled. They wanted it all to be true.

“And I think it goes all the way up to Obama. I don’t know how he didn’t know about this. Brennan, Clapper, all of these people in his regime, leadership and the FBI, it’s not enough to call it the worst scandal in the world. They almost got away with this, Sean. And the fact that we say it can never be allowed to happen again, it’s still happening. They haven’t changed their tack whatsoever. The objective remains, get rid of Trump, defeat us however they can.”

Limbaugh continued: “There was no evidence ever of collusion. It should never have begun. Rosenstein should have never appointed anybody. The FISA warrants to spy on the Trump campaign were illegal. The judges there were either complicit to this or they were lied to and now don’t care. We’ve got a two-tier justice system. The very foundations of this country have been attacked and assaulted and the people who know it in the mainstream media are complicit in it instead of trying to blow it up and explain it to the American people.”

In an interview earlier on March 28 on Fox News’ “Special Report”, Limbaugh called on Trump to appoint a special counsel to investigate the origins of the Russia hoax.

“It is outrageous and some of these people need to be held accountable,” Limbaugh said. “I hope the president calls a special counsel to look into this because the American people deserve to know how they’ve been manipulated, how they have been used. They deserve to know what the Democratic party, the American left descending from the Obama administration attempted to pull off here.”

“It better never, ever happen again,” he said. “This is probably the biggest political scandal certainly of our lifetimes and maybe even longer.”