Letter: Billionaires are running our lives and telling us what to think

The United States, along with other first world countries, has adopted war as an essential element of the world economic structure, limited war for sure, but permanent nonetheless. The providers of the weapons and other war materiel are obvious beneficiaries. The day after the Syrian missile attack, stock prices of Boeing, Lockheed-Martin, General Dynamics, and others soared. Raytheon provided the missiles that cost about a million dollars apiece. 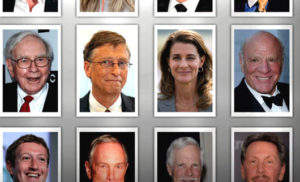 The attack ordered by President Trump was fully supported by Germany, Great Britain, and others. The American role as the world’s policeman was reasserted for all to see. We may see more American troops deployed to the Middle East.

The President explained that the strike was needed in order to protect vital U.S. interests in the region. Those interests were not explained. This failure to offer explanation originated with U.S. involvement in Vietnam by President Lyndon Johnson. President Kennedy had begun to withdraw American soldiers from Vietnam. Obviously, there were two different opinions about American interests there.

The Syrian attack may once again put Americans in harm’s way for dubious reasons. Will we ever learn? Some of us have. Our intellect and emotions do not allow us to ignore reality. Those of us who realize the absurdity of it all are ignored, belittled, and called anything but a child of God.

Permanent war is promoted by both political parties, if there really are two parties. Notable Democrats Schumer and Clinton echoed the sentiments of Republicans McCain and Graham. President Trump was initially opposed, and it is likely that the strike accomplished another purpose which was to take attention away from the failed Republican effort to repeal ObamaCare.

The politicians are nothing more than servants of the one world government proponents, the Globalists. George H. W. Bush spoke openly of the new order initiated by the Globalists. In exchange for their support, American politicians are rewarded with esteemed status and privileged positions. In the rarified air at these levels, there is no United States, Saudi Arabia, England, Syria, Israel, or any other country. There is only business.

Wealth provides the ability to those who have wealth to exert their influence. Most of the uber wealthy avoid the limelight. They remain mostly in the shadows. Yet, the influence they exercise is undeniable and likely to continue.

Of the six billion people on the planet, about two thousand, all billionaires, control virtually every aspect of our lives. Chief among all this is the ability to control what we think and more importantly, what we do. Ordinary citizens have no more ability to stop war than we do to stop the illegal drug trade which may be more profitable than war. Both flourish because the rulers of this world have ordered them, support them, and benefit from them.

The United States is the only stumbling block to the one world government. It is only a matter of time before the façade of American exceptionalism is removed. The Globalists have won. Americans are not ready to accept this reality.

Letter to the editor: Billionaires are running our lives and telling us what to think, WorldTribune.com