The meme that became a movement has such immense momentum that it is taking over sports stadiums, concert venues, and even the iTunes music charts. 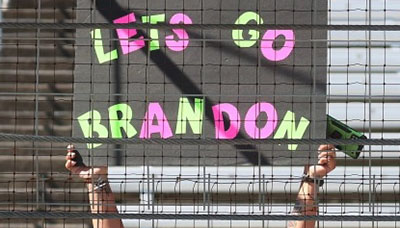 This past weekend, local news reported the “Let’s Go, Brandon” chant could be heard during tailgating, pre-game and during the college football game in Jacksonville pitting undefeated Georgia against Florida.

Five of the top 10 iTunes rap and hip-hop songs on Sunday’s charts were all versions of “Let’s Go Brandon,” including a remix by Godz Child and a tune by Topher, D.Cure & the Marine Rapper.

Former President Donald Trump was spotted getting a chuckle out of the chant at the World Series game between the Atlanta Braves and Houston Astros on Sunday.

MUSIC TO MY EARS!!!😂😂😂 #LetsGoBrandon pic.twitter.com/LQsok2r0NU

Some 50,000 people at a concert featuring rapper Loza Alexander sung along with “Let’s Go, Brandon”.

Several politicians have publicly used, retweeted or supported the chant:

• On Oct. 28, Republican Rep. Jeff Duncan of South Carolina wore a “Let’s Go, Brandon” face mask and posted a Facebook photo of himself wearing it with the caption: “The American people are furious.”

• On Oct. 28, Doug Andres, press secretary for Senate Republican Leader Mitch McConnell, retweeted a photo of the phrase on a construction sign with the tweet: “Spotted in Falls Church, VA.”

• On Oct. 27 during Game 2 of the World Series with the Houston Astros and the Atlanta Braves, Texas Republican Sen. Ted Cruz posed with a Houston Astros fan. That person was holding a sign with “Let’s go, Brandon” in all caps, and Cruz posted that photo on social media.

• On Oct. 31, Florida state Rep. Randy Fine posted a photo on his Facebook page, showing a pumpkin his son had carved for Halloween with the “Let’s go, Brandon” phrase.

Meanwhile, Southwest Airlines has reportedly launched an internal investigation into an Associated Press reporter’s claim that a pilot said “Let’s Go, Brandon” over the loudspeaker.

In a Sunday statement, the airline said that it “does not tolerate any behavior that encourages divisiveness” in response to AP reporter Colleen Long, who tweeted that she asked the crew to unlock the cockpit door after hearing the pilot use the phrase.

Long wasn’t the only one to throw a tantrum over the pilot taking part in the widespread movement.

“Can I get 1,000 people to quickly comment #FIRED so we can pressure @SouthwestAir to FIRE the MAGA pilot who said ‘Let’s Go Brandon’ (which means F*ck Joe Biden) over the loudspeaker?” tweeted Democrat operative Jon Cooper.

Conservatives responded by tweeting examples of celebrities and others making profane anti-Trump statements and urging Southwest to stand up for the pilot.

“For everyone who says ‘politics should be kept out of the workplace’ – you first. Teachers need to stop expressing political opinions in the classroom. Corporations need to stop donating to the BLM org and other Marxist front groups. And stop boycotting states over politics,” Pushaw added.

Fox News contributor and radio host Lisa Boothe said: “Southwest, don’t cave to the woke mob. Let’s Go Brandon is being chanted at stadiums across America and was the #1 song in the country. Brandon is polling at 42%. No one likes Brandon.”