President Donald Trump has warned of the huge potential for fraud in massive mail-in voting. Democrats who are pushing for majority mail-in voting call the president delusional. 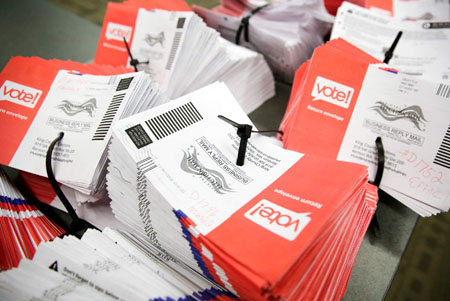 “If concern about vote fraud with mail-in ballots is delusional, it is a delusion that is shared by most of the world,” John R. Lott noted in an Aug. 3 report for the Crime Prevention Research Center.

Lott referenced cases of deceased voters receiving mail-in ballots, including 458,000 in California; a report that 83 mail-in ballots went to a single, two-bedroom apartment; and reports of fraud in Pennsylvania mail-in voting that resulted in giving Democrats control of the state Senate in 1994.

“Even the countries that allow mail-in ballots have protections, such as government-issued photo IDs. But Americans are constantly assured even this step is completely unnecessary. Without basic precautions, our elections are on course to become the laughing stock of the developed world,” Lott said.

Mail-in voting is banned in most of the countries that the Left seeks to model the U.S. after, according to Lott’s review of voting rules and histories in over 30 major nations.

“Liberals and progressives often try to model the U.S. on Western European countries in many ways, but you never hear them arguing that we should adopt their voting rules. There is a reason for that. Banning mail-in voting or requiring people to use photo IDs to obtain a mail-in ballot is quite common in developed countries, especially in Europe,” Lott noted.

“Most developed countries, especially in Europe, ban mail-in voting to fight vast fraud and vote buying that had threatened the integrity of their elections,” Washington Examiner columnist Paul Bedard said in a review of Lott’s report.

In overseas cases, Lott cited a case of mail-in voting fraud in 2005 that led to the election of six officials in Birmingham, England, and the history of fraud in Mexico.

The majority of European Union nations, Lott noted, ban mail-in ballots except for citizens living overseas. Some have even imposed a ban for those overseas. Those nations that do allow mail-in ballots require some form of photo ID to get one.

“These countries have learned the hard way about what happens when mail-in ballots aren’t secured,” Lott said. “They have also discovered how hard it is to detect vote buying when both those buying and selling the votes have an incentive to hide the exchange.”

Lott’s report referred to mail-in voting as a “throwback to the dark old days of vote-buying and fraud. Like most of the rest of the world, Americans deserve a more trustworthy system.”