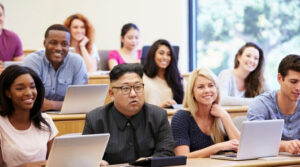 “I thought I knew all there was to know about communist indoctrination, but I was wrong,” said the ruthless dictator to reporters after sitting through a 2-hour lecture. …

According to experts, Ivy League schools in America boast the world’s finest anti-Western propaganda and brainwashing techniques. The North Korean dictator expressed hope that his newfound knowledge would help him make his citizens more robotically obedient.