Kenneth Starr on Hillary and the truth: ‘Her strained performance struck us as preposterous’ 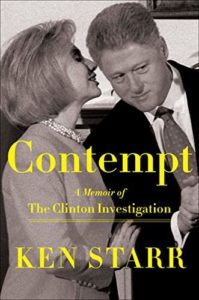 “In the space of three hours, she claimed, by our count, over a hundred times that she ‘did not recall’ or ‘did not remember.’ This suggested outright mendacity,” Starr writes in his new book “Contempt: A Memoir of the Clinton Investigation”.

“To be sure, human memory is notoriously fallible,” Starr writes, “but her strained performance struck us as preposterous. What was clear was that Mrs. Clinton couldn’t be bothered to make it appear as if she were telling the truth.”

Starr said he considered filing perjury charges but ultimately decided not to, saying it was too difficult to prove that she lied based primarily on the number of times she claimed that she “didn’t know.”

“I was upset over Mrs. Clinton’s performance, and was even considering bringing the matter before the Washington grand jury for possible indictment on perjury,” Starr explained.

President Bill Clinton was much more genial than his wife during their interviews, Starr noted, but the former president also did not come off as truthful: “Clinton bobbed and weaved, but was always pleasant as he avoided answering.”

Starr concluded that both the president and the first lady “knowingly embarked on a continuing course of action that was contemptuous of our revered system of justice.”