A federal jury in Las Vegas on Aug. 22 refused to convict four men who were being retried on accusations of threatening and assaulting federal agents during the 2014 standoff at the Nevada ranch of Cliven Bundy.

The jury acquitted Ricky Lovelien and Steven Stewart of all 10 charges, and delivered not-guilty findings on most charges against Scott Drexler and Eric Parker, The Associated Press reported. 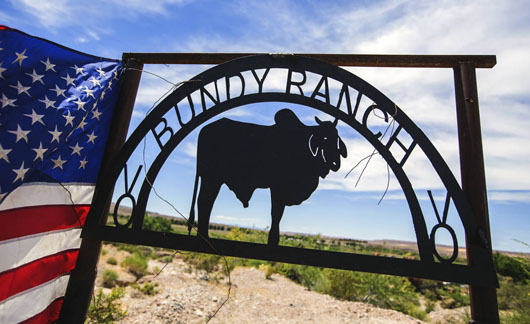 “They’ve been tried twice and found not guilty,” Bundy family matriarch Carol Bundy said outside court. “We the people are not guilty.”

None of the defendants was found guilty of a key conspiracy charge alleging that they plotted with Bundy family members to form a self-styled militia and prevent the lawful enforcement of multiple court orders to remove Bundy cattle from rangeland in what is now the Gold Butte National Monument.

The Aug. 22 verdicts were seen as a stunning setback to federal prosecutors who are planning to try Cliven Bundy and two adult sons later this year.

“Random people off the streets, these jurors, they told the government again that we’re not going to put up with tyranny,” said John Lamb, a Montana resident who attended almost all five weeks of the trial.

Chief U.S. District Judge Gloria Navarro ordered Lovelien and Stewart freed immediately and set hearings to decide if Parker and Drexler should remain jailed pending a government decision whether to seek a third trial. With the release of Lovelien and Stewart, 17 people who were charged in the standoff are still in federal custody.

The judge rejected testimony from five prospective defense witnesses, and Drexler and Parker were the only defendants to testify in their defense. However, the judge struck Parker’s testimony for what she said was a deliberate failure to keep his testimony within her rules.

Drexler’s attorney, Todd Leventhal, referred to defense teams’ complaints that Navarro set such strict rules of evidence that defendants weren’t able to tell why they traveled to the Bundy ranch.

All four defense attorneys declined Aug. 15 to make closing arguments, a gesture of standing mute that Leventhal said may have had an effect on the jury.

“As much as we were shut down from bringing anything up, the jury saw through it,” he said.

A first trial earlier this year lasted two months and ended in April with a different jury finding two defendants – Gregory Burleson of Phoenix and Todd Engel of Idaho – guilty of some charges but failing to reach verdicts against Drexler, Parker, Lovelien and Stewart.