Judicial Watch’s Fitton: Vote-by-mail ‘a real threat to the integrity of American elections’

Judicial Watch President Tom Fitton on June 3 provided testimony to the House Judiciary Committee’s Subcommittee on the Constitution, Civil Rights, and Civil Liberties during a hearing titled “Protecting the Right to Vote During the COVID-19 Pandemic”. 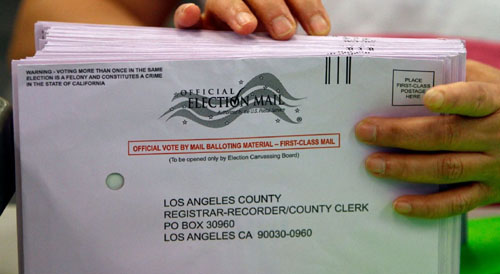 “The American people see what they conclude are disingenuous fights over electoral procedures and lose faith in the honesty of our elections,” Fitton said. “With this background in mind I turn to measures proposed in response to the COVID-19 pandemic. One of the more common suggestions now is to require greater reliance on mail-in ballots. For example, last month Governor Newsom issued an executive order requiring that county elections officials transmit mail ballots to every registered voter in the State. I view this as a real threat to the integrity of American elections.”

Fitton went on to point out that “it is now about five months until election day, and the pandemic’s infection curve has flattened. Insisting now on all-mail ballot elections seems less like a response to a health crisis and more like a partisan application of the immortal words of Rahm Emanuel: ‘Never allow a good crisis to go to waste.’ ”

Fitton noted that Judicial Watch has “been involved for almost a decade in ensuring the honesty and integrity of our electoral processes” and “is now the nation’s premier enforcer, public or private, of the election integrity provisions of the National Voter Registration Act of 1993 (NVRA).”

For more than 25 years, Judicial Watch has been known for its aggressive, leading edge use of public records laws and lawsuits, as well as taxpayer, civil rights, and whistleblower protection litigation to fight government corruption. In 2012, it launched a nationwide effort to promote voting integrity and protect voting rights. As part of this effort, Judicial Watch assembled a team of highly experienced voting rights attorneys who have fought gerrymandering in Maryland, stopped discriminatory elections in Hawaii, and cleaned up voter rolls in Ohio, Indiana, and Kentucky, among other achievements.

In 2018, California settled a federal lawsuit with Judicial Watch and began the process of removing up to 1.6 million inactive names from Los Angeles County’s voter rolls. In April, Judicial Watch sued North Carolina and Pennsylvania to force them to clean up their voter rolls. Judicial Watch also just filed a lawsuit to stop the special, statewide vote-by-mail mandate issued by California Governor Gavin Newsom.