Judicial Watch announced that it filed a civil rights lawsuit against Washington, D.C. Mayor Muriel Bowser and other officials for First Amendment violations over their refusal to allow Judicial Watch to paint the message “Because No One Is Above the Law!” on a D.C. street. 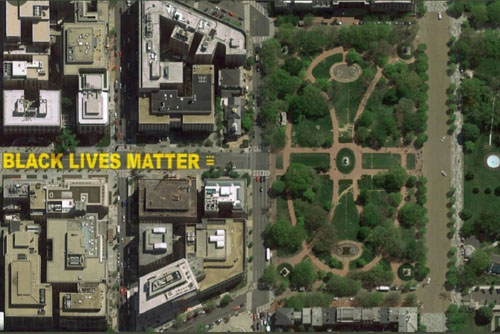 Judicial Watch is also asking New York City Mayor Bill de Blasio to paint “Because No One Is Above the Law“ on Fifth Avenue after the mayor said “Black Lives Matter” would be painted on the street outside Trump Tower.

On June 10, Judicial Watch sent a letter requesting permission to paint “Because No One is Above the Law!” near its headquarters near Capitol Hill in the identical size and coloring of the “Black Lives Matter” painting. Judicial Watch offered to pay for the cost of the painting and, citing the timely nature of the issue, asked for a response in three days.

Instead, after three weeks of emails with the mayor’s office, Judicial Watch has yet to receive a substantive response to its street painting request.

“Mayor Bowser gave us the runaround rather than access, as the First Amendment requires, to a D.C. street to paint our timely message and motto: Because No One is Above the Law!” stated Judicial Watch President Tom Fitton. “Our message is especially relevant today because it applies equally to law enforcement and public officials as well as to protesters, looters, and rioters.”

The lawsuit alleges that D.C. officials denied timely, equal access to Judicial Watch to paint its own expressive message and violated federal civil rights law in:

On June 30, in response de Blasio’s announcement that “Black Lives Matter” is to be painted on prominent streets in all five New York City boroughs, Judicial Watch formally asked the mayor for permission to paint “Because No One Is Above the Law” on a street, preferably Fifth Avenue between 81st and 83rd Streets.

The following is Judicial Watch’s letter to de Blasio:

Re: Request to Paint Message Along Fifth Avenue Between 81st and 83rd Streets

On June 9, 2020, the City’s press office issued a press release stating that your administration will work with community activists to paint five streets, one in each borough, to commemorate the Black Lives Matter movement. During a press conference 10 days later, you announced the five locations to include Center Street, in Manhattan; Richmond Terrace, in Staten Island; Joralemon Street, in Brooklyn; 153rd Street in Queens; and Morris Avenue in the Bronx. On June 26th, you also confirmed that “Black Lives Matter” would be painted along Fifth Avenue between 56th and 57th Streets. These paintings are expressive activity.

Judicial Watch, Inc. is a Washington, DC-based, non-profit organization. For more than twenty-five years, Judicial Watch, Inc. has promoted transparency, accountability and integrity in government and fidelity to the rule of law. Our motto is “Because No One Is Above the Law!” – a message that is particularly relevant today because it applies equally to law enforcement and public officials as well as to protesters, looters, and rioters.

Because City streets are now being used as public fora for expressive activity, we would like to have our motto painted along a street, preferably Fifth Avenue between 81st and 83rd Streets. The lettering would be identical in size and color to the lettering used to paint “Black Lives Matter” in the six above-referenced locations. We would pay the cost of the painting, but we would likely need the assistance of the City to aid in traffic diversion and parking restrictions while the painting is completed. Of course, the painting could be completed in the same manner as the other locations.

As the timeliness of our message is important, please respond within 3 working days. If our desired location is not possible, we are open to considering alternative locations.

Thank you for your prompt attention to this matter.

Because No One Is Above the Law!, BLM, Judicial Watch pursues First Amendment access to paint messages on D.C., New York streets, WorldTribune.com