MOSCOW — As the news of Donald Trump’s upset victory in the U.S. presidential election rolled into Russia, there was jubilation among many allies of President Vladimir Putin’s Kremlin — which has demonized Hillary Clinton and seemed to root for the Republican candidate — while some politicians predicted the stunning result would have little effect on badly strained U.S. ties.

State Duma deputies broke into applause after lawmaker Vyacheslav Nikonov broke the news to the lower parliament house on the morning of November 9: “Colleagues, three minutes ago Hillary Clinton acknowledged her defeat in the U.S. presidential election, and a second ago Trump began his speech as president-elect of the United States.” 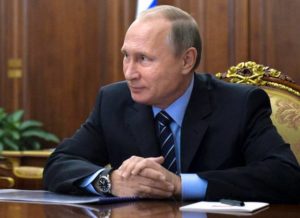 Trump won a race that had more focus on Russia than any since the Cold War and was very closely watched in Moscow, with the United States accusing Putin’s government of stealing and releasing e-mails “to interfere with the U.S. election process” and the Russian state media taking aim at both Clinton and U.S. democracy as a whole.

Trump had praised Putin during the campaign and suggested he would improve relations, while Clinton vowed to be tough on Russia over its assertive actions in Ukraine, Syria, and elsewhere.

Flamboyant ultranationalist lawmaker Vladimir Zhirinovsky — who recently said a Clinton win would lead to nuclear war — told the Duma he would be sending Trump a telegram with the message: “Dear Donald, congratulations with this deserved victory, let grandma Hillary get some rest” and saying that “the majority of Russians are for Donald Trump.”

Putin congratulated Trump in a telegram shortly after Clinton conceded.

He “expressed hope for joint work to lift Russian-American relations out of a state of crisis, and also to address pressing international issues and search for effective responses to challenges concerning global security,” the Kremlin said.

Prominent pro-Kremlin lawmaker Aleksei Pushkov, a vocal critic of the United States, tweeted that a “reset” of Russia-U.S. relations is “unavoidable.”

“Relations with Russia and Putin were a key issue in the election,” Pushkov said. “Trump identified himself as anti-Obama. He will not leave everything as it is.”

Putin came across as less certain and seemed to place the onus on Trump to take steps to lift ties out what he called a state of “degradation,” saying “it is not our fault that Russian-American relations have reached such a condition.”

Putin’s spokesman, Dmitry Peskov, praised Trump for a victory speech in which the political novice promised to deal “fairly” with all other nations and “seek common ground, not hostility, partnership, not conflict.”

“This is absolutely, phenomenally in line with the basic position that Putin himself holds: that, with the Russian Federation’s national interests as the unconditional priority, we seek good relations with all countries that want to have them with us,” Peskov said.

Sergei Mironov, who heads the pro-Kremlin Just Russia party and who on November 9 was placed on a European Union sanctions list over Moscow’s aggression in Ukraine, was quoted by state radio station Vesti FM as saying that a “new page” in ties with Washington has been turned, and that the Kremlin has traditionally had better relations with the United States when a Republican is in office.

“Despite all the intrigue and provocations which the current U.S. authorities created for Trump, people supported his intention to seek to resolve the serious problems that have accumulated in America and to move from confrontation to partnership with Russia and the world,” Zheleznyahk said.

But Communist Party leader Gennady Zyuganov said Trump’s election was no watershed, and made clear his party would continue to portray the United States as a global aggressor.

“I assure you that nothing serious will change: the times have changed, the technology, the weather, but the strategy of the Americans has not,” he said. “That is: expansion, the assertion of their dominance, and in recent years — global policies with the aim of subordinating the main strategic resources — whether raw materials, information, or financial flows — to themselves.”

Russia’s Culture Ministry turned to Winnie the Pooh for its assessment of the U.S. election outcome and its potential effect on Russian-U.S. ties, posting a tweet of the Soviet cartoon version of the British children’s classic — Vinny Pukh. It shows Clinton as Eeyore the donkey and Trump, as Piglet, befriending Pooh, the bear symbolizing Russia.

The pro-Kremlin tabloid site LifeNews cited lawmaker Vitaly Milonov, who campaigned for anti-gay laws that U.S. President Barack Obama’s administration has criticized, as saying that the United States will now longer be a “global thug.”

“Of course, the prospects of an improvement in ties under Trump are much higher. He is a much more pragmatic person. He understands that the States does not gain from being a thug. The gain from normal ties is much higher than militarized ones,” Milonov said.

“Often, election campaign rhetoric has nothing in common with reality, but we have to say there are good signs that America will again make itself, as they say, great and not get wound up in all the sorts of adventures that Obama dragged it into.”

Kremlin pool journalist Dmitry Smirnov tweeted: “Comrades! The Great American revolution that no one believed in has happened! Now everyone to the disco!”

Smirnov also posted a picture of Trump standing with Russian mixed martial arts champion Fyodor Yemelyanenko, with the caption: “A little something on the secrets of Trump’s victory.”

In a wry reference to the alleged Kremlin interference in the U.S. campaign, several Twitter users posted a photograph of Putin signing a decree and added the caption: “Appoint Trump Donald Fredovich the authorized envoy to the North American Federal District.”

Another tweet played on images of Russia’s cavernous spaceflight Mission Control center and a military operations center in Moscow, showing Putin and senior officials watching screens in “the Moscow Mission Control Center for the U.S. Elections.”

Most opinion polls in the days before the election favored Clinton, and Trump’s win was as much of a surprise in Russia as it was for many Americans.

A commentary posted on the website of the pro-Kremlin newspaper Izvestia at about 8 a.m. Moscow time — midnight in Washington — appeared to call the victory for Clinton: It said she had been chosen by the elite as the winner from the very beginning and that Trump’s presence was designed to “create the illusion of competition” — a charge often mounted in the West about Putin’s election opponents.

“I admit I was wrong in my predictions, I didn’t believe in a Trump victory. Not because he is weaker but because he went against the System,” Konstantin Kosachyov, chairman of the International Affairs committee in the upper parliament house, wrote on Facebook. He added that it is unclear how much change Trump will bring.

“It’s not a fact that Donald Trump’s America will turn out to be more successful in this sense – after all, his main slogan was ‘Make America great again’. How?”

Meanwhile, a noticeable theme in pro-Kremlin commentary was the idea – set out without any evidence – that Trump’s life is now in danger.

An article in the mass-circulation tabloid Komsomolskaya Pravda warned that Trump could be assassinated by his opponents, saying “the degree of danger after the election will only grow!”

Igor Korotchenko, an anti-Western military analyst, tweeted: “Trump showed himself a real political warrior. Now the U.S. secret services must provide him reliable security for the next four years.”

While many allies of Putin celebrated Trump’s win, that response was far from universal.

A photograph posted on Twitter by a Russian journalist showed flowers laid outside the U.S. Embassy in Moscow with the message “Je suis USA,” implying that the election of Trump was a tragedy worthy of collective international mourning.