The House Select Committee on Jan. 6 is altering evidence and lying to the American people in what is a “choreographed” show trial, Ohio Republican Rep. Jim Jordan said.

“We know that this committee has altered evidence and lied to the American people about it, so much so that they had to issue a statement which says, we regret the error, which is government-speak for, we got caught lying,” Jordan told Fox News “Sunday Morning Futures” host Maria Bartiromo. 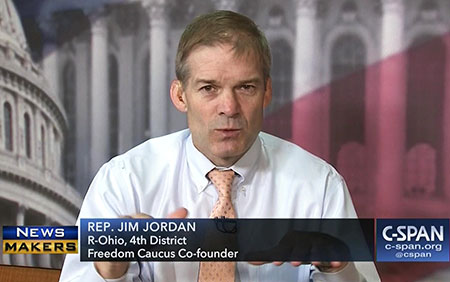 He noted that their behavior “sends a clear message to the president that he had very few foot soldiers who were on his side working for him. And, if and when he gets back in power, we need a complete overhaul. I have a complete list ready to go … of who is legit and who is not.”

Jordan asserted that the Jan. 6 committee is nothing more that “a production” which is “selectively pulling out information that we get no chance to see, presenting that to the American people in a completely partisan fashion.”

Jordan added: “I want to see all the documents. And ranking member Rodney Davis has already sent a preservation letter to the committee, saying, preserve all this information, so we can look at it, and the American people can get the full story, not just this one-sided, choreographed presentation we got the other night.”

Meanwhile, in an interview last week on Fox News’s “Ingraham Angle”, Jordan cited an anonymous “decorated” Iraq War veteran who is accusing the FBI of allegedly purging conservatives from the bureau if they dare to question the Left’s Jan. 6 narrative.

“We’re learning exclusively tonight about what’s going on inside the FBI: Whistleblowers have told Congressman Jim Jordan that the agency is in full-blown retaliation mode, referring to what’s going on as a ‘purge’ of agency employees who hold conservative views,” host Laura Ingraham noted. “One employee reportedly had a security clearance taken away and then he was indefinitely suspended from his duty and got his pay taken away for disagreeing with their Jan. 6 narrative.”

Ingraham asked Jordan: “Now, this specific FBI employee I mentioned, what can you tell us more about him or her?”

Jordan responded: “[He is a] decorated Iraqi War veteran being run out of the FBI. His allegiance to the country is being questioned because he had the gall to say something that offended the FBI leadership about the Jan. 6 investigation. The other [individual] is also having the same thing happen to them simply because, on an anonymous questionnaire, they said something that the leadership disagreed with them about Jan. 6.”

Jordan added: “And I would point out that we now have had six agents come forward as whistleblowers — two on the school boards narrative… and four now, regarding Jan. 6. That is a concern to us, but we’ve had literally a half-a-dozen FBI agents come to our committee.”

Ingraham asked: “It’s happening all over government is it not, Jim? I mean, it’s happening at the FBI. We know it’s happening in our military with the whole ‘Stand Down’ order, remember in the spring of 2021 after Jan. 6? We have to make sure there are no ‘unsavory’ people in our military. That was a warning shot that they fired across the bow for our young military men and women, was it not?”

Jordan responded: “Right. Exactly, it’s the weaponization of government against your political foes. The legacy of Attorney General Garland right now is the school boards issue. Writing the memorandum that treats moms and dads as domestic terrorists, that’s the legacy thus far in his tenure as attorney general. But this weaponization of government against your political foes is exactly what’s going on. So much so that we had the Disinformation Governance Board and but for your efforts and others pointing this out, that might still be in operation.”

Jordan continued: “And the context here with the FBI… remember, a few years ago they spied on President Trump. Then it was the actions they took against parents regarding the school board situation and then two whistleblowers last month had come forward who attended the Jan. 6 rally, on their own time, with their spouse, didn’t go into the Capitol, haven’t been charged… but they’ve had their security clearance taken from them too, which is always the first step in termination. Again, one of those individuals was also a veteran in our armed forces.

“This is happening and it is as wrong as wrong can be.”

🚨 LATE BREAKING: New whistleblowers allege the FBI is “purging” conservatives at the Bureau.

One agent? A decorated war veteran who served in Iraq and Kuwait.

The FBI had the audacity to question the whistleblower’s loyalty to the country! pic.twitter.com/5yCCIp20MQ

In December, Democrat Rep. Adam Schiff, who is inexplicably a member of the Jan. 6 committee despite what critics say is a mountain of falsehoods he spread during the Trump-Russia investigation, presented a graphic showing an altered text message between Jordan and former White House Chief of Staff Mark Meadows. Jordan admitted he sent the message to Meadows but stressed that it was only a part of a message he “forwarded” from an attorney named Joseph Schmitz, who was positing a legal theory about overturning the results of the 2020 election.

The Jan. 6 panel later apologized for the “error,” which involved truncating the message with a period, while Schiff presented it to the public without full context.

“So that’s what this committee is about. I think the country sees it for what it is, a partisan political activity. That’s why the leader and I wrote the op-ed that we did in The Wall Street Journal a couple of weeks ago,” Jordan said.