It’s official: Orwell’s Big Brother is here and 2 plus 2 is 5

The Democrat Party, which includes its media propaganda and educational indoctrination wings, is engaged in an all-out war on reality. 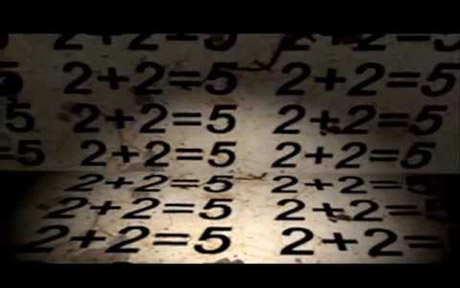 Rubel explained in a tweet to her followers: “The idea that math (or data) is culturally neutral or in any way objective is a MYTH. … Along with the ‘Of course math is neutral because 2+2=4’ trope are the related (and creepy) ‘Math is pure’ and ‘Protect math.’ Reeks of white supremacist patriarchy. I’d rather think on nurturing people & protecting the planet (with math in service of them goals).”

That ideology is also being pushed in U.S. classrooms “from high school down to preschool,” Kupelian wrote for World Net Daily on March 21.

“The denial of objective reality – which to those in power confers the delusion they can control not just people’s minds, but reality itself, like gods – is very much the political, psychological and spiritual identity of today’s Democratic Party,” David Kupelian noted.

“Indeed, the madness of ‘the Party’ in ‘1984’ is shared by the ruling Democratic Party in 2021 America, and is spreading across the land like a pandemic.”

In Oregon, the state’s education department is promoting “A Pathway to Math Equity,” intended to train teachers in how to “dismantle racism in mathematics instruction.”

The main “toxic characteristic” in Oregon, Kupelian notes, is “being the old-fashioned focus on getting the ‘right’ answer.”

Kupelian noted: “Today, the Democratic Party, while claiming to be the party of science, operates in stupefying denial of basic biology. It holds that there are dozens of different genders – but then, relative truth can accommodate an infinite number of new genders. Today’s Democrats believe men can menstruate, get pregnant, have babies and ‘chest-feed’ their little ones. On the other hand, babies aren’t actually human until the moment they’re born, when they suddenly are magically transformed into precious children. One minute earlier they were just bio-waste, unwanted tumor-like tissue to be destroyed at will (by means of poison, decapitation, chemical burning or induced heart attack) and discarded – but only if ‘the mother and her doctor’ so decide.

“Let that sink in: Whether ‘it’ is the most precious thing in the universe – a newborn human baby, created in the image of God – or just an unwanted and disposable mass of organic matter, has no objective reality. The answer is only to be found in the minds of the god-like beings wielding power over ‘it’ – just as two plus two can equal four, or five if you prefer. Either way is OK. It’s your personal truth. That’s how a man can one day decide that he is now a woman. It’s all in his mind.”

As Orwell wrote in “1984,” the “Party” controls everything in the mythical state of Oceania – from its politics to its culture to its economy.

“But what the ruling oligarchy most craves,” Kupelian pointed out, “which enables it to exercise full totalitarian control of its citizens, is shaping and taking control of the people’s thoughts, feelings, emotions, attitudes, beliefs, guilts, comforts, and particularly their sense of moral self-worth. This is precisely what today’s ‘woke progressive Left’ (all Marxist code words) is engaged in doing in every corner of society – but nowhere more consequentially than in education.”

Writing for The Post Millennial in August 2020, Libby Emmons noted: “The eradication of basic mathematical principles, the push for people to believe what they are told to believe as opposed to that which is logical, reasoned, and proven, is a push toward creating more manageable humans that will be more susceptible to authoritarian control.”

Last year, James Lindsay of New Discourses, posted a meme on social media that read “2+2=4: A perspective in white, Western mathematics that marginalizes other possible values.”

Lindsay’s meme was aimed (squarely even) at the current woke culture where pretty much everything is labeled as racist, white supremacist, misogynist, homophobic, transphobic, xenophobic, otherizing, shaming, or problematic.

The meme made that clear, but woke leftists began posting a new meme — “2+2=5” — without any hint of irony whatsoever.