A company with direct ties to George Soros is providing voting machines to 16 states, including key swing states such as Florida and Pennsylvania. 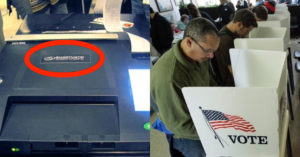 The balloting equipment tied to Soros comes from UK-based Smartmatic, whose chairman Mark Malloch-Brown is a former UN official and sits on the board of Soros’s Open Society Foundations.

Smartmatic has a poor track record of providing free and fair elections.

A 2006 classified U.S. diplomatic cable obtained and released by WikiLeaks reveals the extent to which Smartmatic may have played a hand in rigging the 2004 Venezuelan recall election under a section titled “A Shadow of Fraud.”

The memo stated that “Smartmatic Corporation is a riddle both in ownership and operation, complicated by the fact that its machines have overseen several landslide (and contested) victories by President Hugo Chavez and his supporters.”

“The Smartmatic machines used in Venezuela are widely suspected of, though never proven conclusively to be, susceptible to fraud,” the memo continued. “The Venezuelan opposition is convinced that the Smartmatic machines robbed them of victory in the August 2004 referendum. Since then, there have been at least eight statistical analyses performed on the referendum results.”

“One study obtained the data log from the CANTV network and supposedly proved that the Smartmatic machines were bi-directional and in fact showed irregularities in how they reported their results to the CNE central server during the referendum.”