Infrastructure bill signed by Biden: All vehicles made after 2026 must have remote kill switch

Buried deep within the $1.2 trillion infrastructure bill forced through Congress by Democrats and signed by Joe Biden in November is a mandate that all vehicles made after 2026 have kill switches that will have a “back door” which allows government agencies to shut your vehicle off remotely. 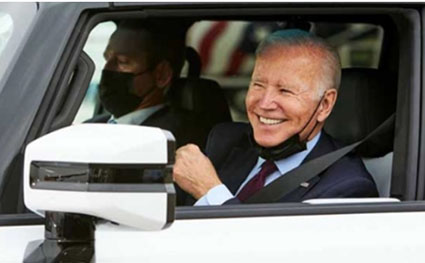 “This is a privacy disaster in the making, and the fact that the provision made it through the Congress reveals — yet again — how little its members care about the privacy of their constituents,” former Republican Rep. Bob Barr said.

“The choice as to whether a vehicle can or cannot be driven — for vehicles built after 2026 — will rest in the hands of an algorithm over which the car’s owner or driver have neither knowledge nor control,” Barr added.

Marketed to Congress under the guise of a benign tool to help prevent drunk driving, the kill switch is a Green New Deal-type infringement on Americans’ freedom of movement, Levi Russell wrote for RealClear Energy on May 10.

Electric vehicles are already equipped with the kill switch capability via Internet-connected “superchargers.”

“Now that the environmental superiority of electric vehicles is being called into question, the real agenda behind climate hysteria is clear: climate change fear mongers want us poorer and unable to travel and commute as we see fit,” Russell wrote. “As the Biden administration’s intentional policy of high gas prices hits the average American in the pocket book, it’s important to note that the cost of EV batteries is also rising. Subsidized demand for these batteries has led to a massive increase in the prices of conflict minerals, such as lithium and cobalt, that make up these batteries.”

The Left “is turning a blind eye to the horrifying human rights record associated with cobalt and lithium mining,” Russell added. “Child slavery, extremely poor working conditions, and poisoned rivers are just a few of the problems that plague the extraction of these minerals. One could reasonably ask the Biden administration why the American public is being forced to subsidize the horrifying human rights record associated with the mining of these resources.”

As for internal combustion vehicles, Russell noted, so far they “are free of the sorts of nanny state controls that are standard on electric vehicles, so preserving our access to gasoline and diesel fuel is an absolute necessity.”

Democrats and Team Biden further proved via their infrastructure bill that “our ability to move about as you please does not fit with their goals for the future of our world,” Russell wrote.

Buried in infrastructure bill signed by Biden: All vehicles made after 2026 must have remote kill switch, Team Biden, WorldTribune.com

Infrastructure bill signed by Biden: All vehicles made after 2026 must have remote kill switch added by Editor Two on May 15, 2022
View all posts by Editor Two →