Six jihadists linked to Islamic State of Iraq and Levant’s (ISIL’s) terror network in Northeast Asia were arrested after Indonesian authorities uncovered a planned rocket attack by the men on Singapore’s Marina Bay.

Indonesian media reported that the six men, between the ages of 19 and 46, were arrested at various locations across Batam and a stash of weapons was found at one of the locations. 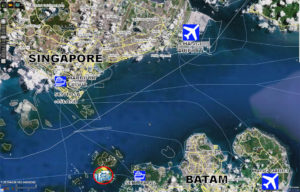 “Yes, there were indeed plans for the attack. But the plans did not materialize,” Indonesian national police spokesperson Boy Rafli Amar was quoted in reports as saying.

Authorities said the terrorists planned to fire the rocket from Batam, Indonesia to Marina Bay. They said the plan was developed with the help of Bahrun Naim, an Indonesian fighting for ISIL in Syria, reports said. Bahrun is believed to be one of the masterminds of an attack in January in central Jakarta, in which eight people were killed including the four attackers.

The reports said the six men who were arrested were members of the ISIL-affiliated KGR@Katibah GR terrorist group – whose ringleader Gigih Rahmat Dewa, 31, is said to be behind the plot to attack Marina Bay.

Singapore’s Ministry of Home Affairs (MHA) said it is aware of the attack plan and has been working with the Indonesian authorities since the discovery of the plot.

The Singapore police and other agencies have increased inland and border security measures in response to the threat and the “prevailing security situation,” MHA added. “This development highlights the seriousness of the terrorism threat to Singapore, and the importance of the SGSecure national movement. The public is advised to remain vigilant.”