In their own words: Illegals explain why they are coming

“They all say the same thing, Biden nos invitó, Biden invited us.”

That is what a man told the Daily Caller News Foundation about his almost daily encounters with illegal migrants crossing through his private land near Mission, Texas. 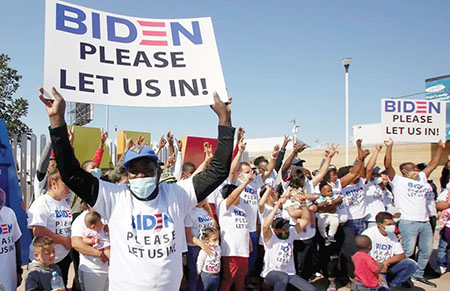 During the Trump administration, the land owner said he would go weeks and sometimes months without seeing an illegal migrant.

“With Obama, it was mostly men with children, no women, but I asked a couple of times, ‘Where’s your daddy?’ and the kid — I remember one kid saying, ‘He’s not here,’ and the so-called father was like five feet away and says, ‘I’m right here.’ He was angry, he was upset, and I could tell, he ain’t the father, but there is nothing I can do,” the land owner told the Daily Caller in a March 30 report.

Other migrants crossing the border told the Daily Caller that Team Biden had given them the opportunity to come to the United States.

“A group of four male Honduran migrants ages 15 to 17 said they came to the U.S. because a hurricane destroyed their house and that it is easier to enter the U.S. under the Biden administration,” the report noted.

Meanwhile, Project Veritas reported that it obtained an exclusive interview with an insider from U.S. Customs and Border Protection (CBP) who disclosed Department of Homeland Security (DHS) documents showing a five year high in arrests of sex offenders at the U.S.-Mexico border.

Project Veritas reports that the unclassified document states: “Criminal aliens with sex-related offenses are attempting to re-enter the United States in record numbers during the Covid-19 pandemic, likely due to unstable economic in their host countries.”

“All the records of the criminal aliens and sex offenders that we arrest now, they all have been previously deported from the United States for committing these crimes in the United States,” said the anonymous CBP whistleblower.

The individual added it’s “possibly underreported because sometimes we don’t know about their criminal history or they haven’t got caught.”

Asked what he fears the most, the CBP whistleblower replied “finding dead children…in the middle of the desert.”

illegals, immigration, In their own words: Illegals explain why they are coming, WorldTribune.com