One name has been overlooked in the millions of pages of evidence, evasions and allegations surrounding Bill and Hillary Clinton. White House Deputy Counsel Vince Foster was the highest-ranking U.S. official to die an unnatural death since the assassination of John F. Kennedy. A WorldTribune editor took part in the first interview (7 months after Foster’s death) with a paramedic who recovered his body on July 20, 1993 in Fort Marcy Park in northern Virginia. As the following Wikipedia entry bears out, there were multiple “investigations” but no closure. Officially, Foster was a suicide. Unofficially, his death remains the central mystery in the constellation of Clinton scandals leading to speculation about the deaths of others with inside knowledge of the couple’s rise to power. 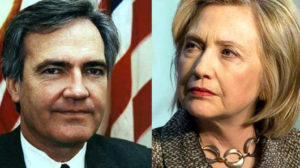 Deputy White House counsel Vince Foster was found dead in Fort Marcy Park off the George Washington Parkway in Virginia, outside Washington, D.C., on July 20, 1993. His death was ruled a suicide by six official investigations, but remains a subject of conspiracy theories.

Independent Counsel Kenneth Starr relied on “experienced investigators with extensive service in the Federal Bureau of Investigation (FBI).”[4] Starr’s final Report on the death of Vincent W. Foster consists of two volumes and is 137 pages.

United States Congressional hearings did not investigate the circumstances of Vincent Foster’s death but specifically confined its inquiry into whether the White House was guilty of “improper conduct” during the course of “the Park Service Police investigation into the death.”[5]

After a three-year investigation, Starr concluded that Foster’s death was a suicide. CNN stated on February 28, 1997, “The Starr report refutes claims by conservative political organizations that Foster was the victim of a murder plot and coverup,” but “despite those findings, right-wing political groups have continued to allege that there was more to the death and that the president and first lady Bill and Hillary Clinton tried to cover it up.”[6]

The final report is The Report on the Death of Vincent W. Foster, Jr., by the Office of Independent Counsel in Re: Madison Guaranty Savings & Loan Association.[7]

Allegations of cover-up by lead investigator

Kenneth Starr’s at-the-time lead investigator, US attorney Miguel Rodriguez,[8] emphatically disagreed with Starr’s conclusion that Foster committed suicide, referring to photographs and medical testimony suggesting a second gunshot wound on Foster’s neck, evidence he asserts Starr suppressed.[9] Concerning the cover-up, he wrote in his resignation letter, “As an ethical person, I don’t believe I could be involved in what they were doing.”[10]

James Norman, former senior editor at Forbes Magazine, discussed[11] and wrote about Vince Foster having a Swiss bank account and possible espionage.[12] An FBI interview report by agent Russell Bransford and a handwritten note from the Office of Independent Counsel found at the National Archives refer to Vincent Foster’s Swiss bank account.[13]

The comments of Patrick Knowlton, a grand jury witness who had been at the park where Foster’s body was found, were included as part of Starr’s Report over Starr’s objection. Judge John D. Butzner wrote to Judges Peter Fay and David Sentelle after Knowlton submitted a motion that his comments be included as part of an appendix to the final report, “I suspect that if we deny this motion we will be charged as conspirators in the cover-up,” and concluded “I suggest we let the motion and attachments speak for themselves.”[14] Judge Peter Fay wrote that Knowlton contradicted “specific factual matters and takes issue with the very basics of the report” filed by Kenneth Starr.[15] Knowlton’s comments were ordered[16]included as part of the official report on September 26, 1997. Two days later, Kenneth Starr filed a 9-page motion[17] to appeal that the comments by Knowlton not be included in the report. The next day, Starr’s motion was denied[18] and Knowlton’s comments were included as part of the final official Report on the Death of Vincent W. Foster.[19]

John H. Clarke, attorney for Patrick Knowlton, argued that by using the FBI, the Office of Independent Counsel employed “the very agency it [was] designed to be independent from, the Justice Department.”[20] Clark further stated “The investigation under the auspices of…Mr. Fiske was little more than an FBI investigation. Publicly available official federal government records indicate that throughout the 16-day U.S. Park Police investigation into the case, FBI participation was significant.[21] Attorney Clarke’s letter argues, “The publicly available federal government record upon which the Fiske Report is based is replete with evidence that the FBI concealed the true facts surrounding Mr. Foster’s death.”[22]

On May 2, 1999, the Washington Post published new details on the pursuit of a Vincent Foster conspiracy in an article by David Brock, a key figure in the Troopergate and Whitewater scandals whose disillusionment with the political corruption motivating what would come to be known as the Arkansas Project ended his lifelong commitment to the Conservative movement and facilitated public dissemination of insider details on G.O.P. machinations. The article explains how Brock was “summoned” to a meeting with Rex Armistead in Miami, Florida at an airport hotel. Brock claims that Armistead laid out for him an elaborate “Vince Foster murder scenario” – a scenario that he found implausible.[23]

In an interview for Salon.com in 2000, Brock also revealed that he and Armistead received funding throughout Clinton’s two terms in office from Richard Scaife for the initiative known as the Arkansas Project.[24] The Project aimed to discredit the sitting president and first lady through investigations into a range of issues that could potentially prove problematic for the couple, from rehashed drug smuggling allegations to their long-standing relationship with Foster and other professionals/officials in Arkansas.

Another prominent reporter to have received funds from Scaife was Christopher W. Ruddy[25] – a former writer for the Scaife-owned Pittsburgh Tribune-Review (and later founder of NewsMax). Eventually, Scaife became the third-largest stockholder of Ruddy’s Newsmax;[26] and both NewsMax and the WorldNetDaily continued to publish materials that showed the Clintons in a negative light.[27]

Ruddy also enjoyed the backing of Joseph Farah and Farah’s organization, the Western Journalism Center. This group supplied him with “additional expense money, funding for Freedom of Information Act requests, legal support and publicity” around his book deal & the requisite research into a conspiracy surrounding Foster’s death.[28] He published his findings in 1997 under the title The Strange Death of Vincent Foster (pub. Simon & Schuster).[29] In the book, he discusses mistakes and transgressions that occurred in the original investigations – in particular, alleged obstruction of justice by White House Counsel Bernard Nussbaum – but stops short of positing an original theory on the circumstances surrounding Foster’s death. Interviews revealed his personal belief that some sort of cover-up took place, which involved moving Foster’s body from the (unknown) site of his death to the park where it was discovered.

Despite Ruddy’s disputed assertions,[30] the Western Journalism Center “placed some 50 ads reprinting Ruddy’s [previous] Tribune-Review stories in the Washington Times in 1999; and then refashioned the Times articles into a $12 packet called simply The Ruddy Investigation.”[31] Shortly thereafter, the Center “circulated a video featuring Ruddy’s claims, Unanswered: The Death of Vincent Foster, that was produced by James Davidson, chairman of the National Taxpayers Union(NTU) and co-editor of the Strategic Investment newsletter.”[31]

The Clinton Chronicles: A political firestorm

This reintroduction of Ruddy’s ideas followed the publication of another book, penned by veteran crime reporter Dan Moldea, titled A Washington Tragedy: How the Death of Vincent Foster Ignited a Political Firestorm. Moldea was approached in 1997 by Regnery Publishing House, a famously conservative group whose leadership was nevertheless impressed by Moldea’s published works, including an exhaustive critique of LAPD Detective Mark Fuhrman, another Regnery author. In researching the debacle created by and surrounding Foster’s death, Moldea found that the most oft-used conspiracy scenario could be traced back to Park Police Major Robert Hines, who shared the idea with Reed Irvine of (Accuracy in Media), and Christopher Ruddy, who was then at the New York Post.[32] Moldea concludes, and Maj. Hines publicly maintains, that Hines incorrectly told Irvine and Ruddy “…that there is no exit wound in Foster’s head.” Moldea proffers further: “I don’t think there was anything nefarious here; he was being approached by reporters and he wanted something to say.”[32] Still, the “missing” exit wound claim continued to surface, propagated mainly by Christopher Ruddy and Joseph Farah.

Moldea’s research sought, among other things, to discover the origins of this line of investigation into the Clintons’ credibility. In an interview for Salon.com, he suggests that “Foster had some blond hair and carpet fibers on his suit jacket, and he had semen in his underwear. So, the Jerry Falwells and the right-wing crowd get a hold of this information, and…they start making movies alleging that the Clintons were involved in this murder.”[32] In 1994, Falwell subsidized the creation of a film called The Clinton Chronicles that featured Christopher Ruddy’s claims that the gun that killed Foster was placed in his hand after the fact, and that Foster’s body was laid out to give the appearance of suicide, among others.[32] Funding for the film was provided by Citizens for Honest Government, an organization to which Falwell gave $200,000 in 1994 and 1995.[33] Citizens for Honest Government covertly paid individuals who had provided information to media outlets such as the Wall Street Journal editorial page and the American Spectator magazine;”[33] and in 1995, made discretionary payments to two Arkansas state troopers who had spoken out in support of the idea of a conspiracy surrounding Foster’s death.[33]The two troopers – Roger Perry and Larry Patterson – had also previously given testimony supporting Paula Jones‘ claims of sexual misconduct and misuse of government resources against Bill Clinton (See: Troopergate).[33] Patrick Matrisciana, president of Citizens for Honest Government, produced The Clinton Chronicles video and appeared in its commercials as an “investigative reporter” where he and Rev. Falwell engaged in the following exchange:[33]

Falwell: “Could you please tell me and the American people why you think that your life and the lives of the others on this video are in danger?”
Matrisciana: “Jerry, two weeks ago we had an interview with a man who was an insider; his plane crashed and he was killed an hour before the interview. You may say this is just a coincidence, but there was another fellow that we were also going to interview, and he was killed in a plane crash. Jerry, are these coincidences? I don’t think so.”

When asked about the spot, Matrisciana admitted he was not a reporter and replied “I doubt our lives were actually ever in any real danger. That was Jerry’s idea to do that … He thought that would be dramatic.”[33]

A suicide note of sorts, actually a draft of a resignation letter, was found torn into 27 pieces in Foster’s briefcase after his death. One piece was missing, which may have contained a signature. The full text of the note is as follows:

I made mistakes from ignorance, inexperience and overwork

I did not knowingly violate any law or standard of conduct

No one in The White House, to my knowledge, violated any law or standard of conduct, including any action in the travel office. There was no intent to benefit any individual or specific group

The FBI lied in their report to the AG

The Ushers Office plotted to have excessive costs incurred, taking advantage of Kaki and HRC

The WSJ editors lie without consequence

I was not meant for the job or the spotlight of public life in Washington. Here ruining people is considered sport.[34]

In memory of Vince Foster who cannot rest in peace, WorldTribune.com