The cadres of the global commentariat often discuss the intricate relationships among the world’s most meaningful triumvirate, namely the United States, Russia, and China. Less often analyzed, however, are the very potent and peculiar interactions between Moscow and Beijing. It is the ghost of Lenin—the decades-long competition between Russia and China to be the leading rival of the United States. 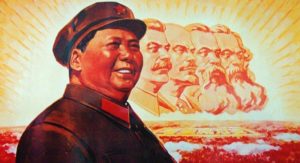 Since Stalin’s death in 1953, China has considered Russia unworthy to be the leader in the international proletariat’s epic battle against the American-led capitalist world. During the Khrushchev era, China viewed the Soviet leader as a wholesale revisionist of Marxism-Leninism, someone who was treasonably soft towards the United States.

To display his faith in Marxist-Leninist orthodoxy, Mao broke off with Moscow in a quixotic and murderous pursuit of confrontation and provocation against the United States and its allies, including the 1958 shelling of the Quemoy-Matsu islands held by the U.S.-backed Nationalist government in Taiwan, and his determination to build up China’s own nuclear arsenal to independently challenge U.S. nuclear dominance in Asia.

In the 1960s and 1970s, Mao continued his intoxication with Marxist-Leninist orthodoxy in the context of an intense, world-wide competition with the Soviet Union for the leadership of the communist movement. From Khrushchev to Brezhnev, China never stopped its crusade against Moscow’s ideological infidelity and “socialist imperialism.” Within China, Mao Zedong manifested this crusade with the decade-long politically paranoid purge of “the Khrushchevs inside the Chinese revolution,” including his heir-apparent Liu Shaoqi and Liu’s successor Lin Biao who was killed in a plane crash in an apparently failed attempt to defect to Moscow in 1971. Millions perished as a result. The death of Mao in 1976 did not end China’s infatuation with Marxism-Leninism; it only moderated its intensity to a certain degree.

In the 1980s and 1990s, Beijing’s communist autocrats and ideologues flouted Moscow with renewed verve and intensified contempt. The reason was Mikhail Gorbachev’s glasnost and perestroika which China viewed with abhorrence and animosity, particularly when Mr. Gorbachev’s May 1989 historic state visit to Beijing became instrumental in inspiring Chinese pro-democracy activists in Tiananmen Square to demand Gorbachev-style reforms inside China’s repressive system. Moments after Gorbachev finished his visit to China, China’s communist leaders perpetrated the Tiananmen Massacre, killing any hope of political reforms. Today, China officially labels Mr. Gorbachev the ultimate traitor to the socialist cause, and single-handedly responsible for the demise of the world’s first socialist state.

Since the collapse of the USSR, the Chinese Communist Party, as evidenced in numerous policy announcements, considers itself to be the only hope for a global socialist triumph. With an economy that is more than five times larger than Russia’s and a steadily growing military, China now views itself as the only worthy rival of the United States. Much to China’s delight, in the past decade world leaders have developed a habit of discussing global affairs in terms of a U.S.-China bipolar context.

But the formerly communist Vladimir Putin has catapulted post-Soviet Russia into the international spotlight in recent years. To China’s chagrin, the newly-risen star of Russia’s status as America’s leading enemy has been much enhanced by America’s paranoiac, Russia-fearing, political election process and by the U.S. national security establishment that is still staffed with Soviet experts and Cold Warriors. Even worse, in 2014 after Russia’s Ukraine and Crimea gambit, Putin brashly put forth his own Asia Pivot by extending Moscow’s influence in Southeast, East, and Northeast Asia, long regarded as China’s spheres of influence, or at least points of contention with the United States.

In Southeast Asia, Putin is strengthening Russia’s alliance with its traditional ally Vietnam, selling Hanoi big-ticket items such as Kilo-class submarines whose primary purpose is to defend against Chinese aggression in the South China Sea. In May 2016, Putin hosted a historic ASEAN-Russia summit in Sochi, Russia, vowing to protect freedom of navigation and international maritime law—a thinly veiled warning to China.

Putin is also wooing Pyongyang’s Kim Jong-Un, whom the Chinese leverage as one of their major bargaining chips in their dealings with the United States. In addition, Putin built an extension of the Trans-Siberian railway into North Korea, actively lobbying Kim to allow Russia to extend the line all the way to South Korea, thereby connecting by land one of Asia’s most robust economic regions with Europe in a manner that could potentially make shipping three times cheaper than the current ocean routes through the Suez Canal.

On various security-related issues, China is attempting to obviate Russian initiatives and replace them with Beijing’s own. For years, Russia has routinely flown provocative military flights near Japan, causing the Japanese Self-Defense forces to scramble to intercept. Not willing to be outdone, China in the past four years has intentionally increased its own provocative military flights to challenge and threaten Japan’s air defense. Now China causes more JSDF scrambles than Russia in a dubious contest for numerical superiority of bad behavior, a contest thoroughly reported and much savored by China’s state-controlled media on a regular basis.

We may also recall that it was Russia that first objected to America’s deployment of THAAD in South Korea. But China doesn’t want to be outdone by Russia either in this regard. Beijing has made the THAAD issue a key point of contention with the United States. As a result, the THAAD red herring is now primarily a Chinese issue, no longer a Russian one, making Beijing once again the primary objector to things American.

In June 1949, on the eve of the triumph of communism in China, Mao Zedong poignantly wrote in his famous essay, On the People’s Democratic Dictatorship, that “the salvoes of the Red October Revolution brought us Marxism-Leninism.” Even at the moment of euphoria and celebration, the Chinese communist leader would credit the root of his historic victory to the Bolshevik Revolution in Russia.

But in China’s view, Moscow as the incubator of China’s communist revolution has long lost its legitimacy as the leader of the global socialist movement, in a continuous and pitiful downward spiral from Khrushchev’s Marxist-Leninist revisionism, to Brezhnev’s socialist imperialism, to Gorbachev’s betrayal of socialism, and now to Putin’s Russian economic and geopolitical nationalism intended to regain Moscow’s prominence as the number one enemy of the U.S.-led evil capitalist empire. But this is the ultimate—albeit dubious—honor for Beijing, which it has fought to obtain and keep since the early 1950s.