U.S. Immigration and Customs Enforcement (ICE) has arrested an illegal alien, who has plead guilty to two counts of sexual battery involving an 11-year-old child, after he was released by a North Carolina sheriff’s office despite an immigration detainer, a report said.

Udiel Aguilar-Castellanos, of Carrboro, was arrested on July 23 by a Raleigh-based ICE team and is being held in the Stewart Detention Center in Lumpkin, Georgia while awaiting deportation to Mexico, the Herald Sun reported. 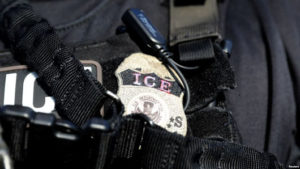 ICE spokesman Bryan Cox said the Orange County Sheriff’s Office did not inform ICE of changes in Aguilar-Castellanos’ status or notify the agency when he was released. He triggered an ICE alert when he was listed in the sex offender registry on July 11, the report said.

The arrest of Aguilar-Castellanos “demonstrates the clear threat to local public safety created when law enforcement agencies do not cooperate with ICE and instead choose to release serious criminal offenders back into the community,” Cox said.

The Orange County Sheriff’s Office on July 25 told Herald Sun reporter Tammy Grubb that ICE could have picked up Aguilar-Castellanos any time after his Sept. 8, 2017 arrest. An attempt to contact ICE after his conviction was unsuccessful, the sheriff’s office said.

Aguilar-Castellanos, 43, pleaded guilty on June 27 to two counts of sexual battery involving an 11-year-old child and was required to register as a sex offender, Grubb’s report said.

“Orange County court records show Aguilar-Castellanos originally was charged with felony indecent liberties with a child and felony second-degree kidnapping,” the report said. “An agreement with prosecutors allowed him to plead guilty to the lesser charge and be released immediately, because he had served 293 days in jail awaiting trial, records show.”

Cox said Aguilar-Castellanos had been under a federal immigration judge’s removal order since January 2015. He had been convicted on a charge of driving while impaired in Durham County in 2014.

It is not the first time Orange County did not honor an ICE detainer for a registered sex offender, Cox said. The county also released a Guatemalan national convicted of sexual battery on a minor female in May, he said, declining to name the person because of “ICE privacy rules.”

Durham County Sheriff Mike Andrews said his department honors ICE detainers, while Clarence Birkhead, who defeated him in the Democratic primary, has said he will not, the report said.

“In its response to ICE, the Orange County Sheriff’s Office said the jail released Aguilar Castellanos on June 27 because he already had served the required time for his crimes,” Grubb noted in the report.

“Aguilar spent close to 300 days in custody awaiting resolution of his charges,” the sheriff’s office said. “At any point during that time, Immigration and Customs Enforcement was able to assume custody of Mr. Aguilar; however, that option was not exercised.”

Sheriff’s Office Maj. Randy Hawkins said he also contacted the Department of Homeland Security at the phone number provided in the detainer, but did not get a response, the report said.

“Neither an immigration detainer or an administrative warrant is issued by a judge or judicial officer, and [those documents] subsequently lack the probable cause necessary to hold someone in custody. Doing otherwise is unconstitutional and in violation of an individual’s Fourth Amendment rights, which would subject the Sheriff and the County to civil liability,” the sheriff’s office statement said.

Cox said that ICE asked Orange County to let them know before releasing Aguilar-Castellanos, so it’s “simply not accurate” for the county to say it attempted to contact ICE prior to his release or in the two weeks after his conviction.

The statement from the sheriff’s office shows that is true, Cox said.

“For sake of argument, assuming they did place one phone call as they state (which we’re accepting for sake of argument alone),” Cox said, “the county concedes it made no real attempt to inform federal authorities that it planned to release, and then did release, a clear threat to public safety that it knew this agency sought to take into custody.”

Sean Gallagher, director of ICE’s Enforcement and Removal Operations Atlanta Field Office, said that “Nearly 90 percent of all foreign nationals taken into ICE custody this year were targeted following their criminal arrest. Despite efforts by certain groups to misrepresent this reality, the fact is ICE continues to focus its enforcement efforts toward criminals and public safety threats. When law enforcement agencies fail to honor immigration detainers and release serious criminal offenders onto the streets it undermines ICE’s ability to protect public safety.”