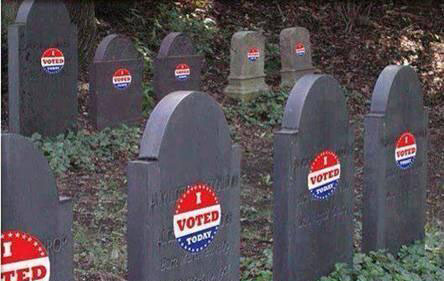 It was reported that five of those seven ballots were recorded as having been returned and counted.

The seven who were sent live ballots would constitute the oldest seven people on the planet who are currently living.

The twitter user Essential Fleccas shared the case of the voter (in the above graphic) named William Bradley, born in 1902 – who appears to have voted via an absentee ballot in the city of Detroit.

If one enters the said data in the Michigan voter information website, one is redirected to a page which shows that Bradley is successfully registered to vote in the state general election and had sent his ballot on Sept. 19 which was duly received on Oct. 2.

Fleccas then proceeded to share an online death record which appears to show a William Bradley with the same pin code having died in 1984. It should be noted that if alive Bradley would be 118 years old but media reports suggest that the oldest living American is the 116-year-old Hester Ford.

Via Candace Owens and Essential Fleccas:

This is insane.
He is literally plugging in the names of dead people and they are all returning as having voted in Michigan.
Where is our Department if Justice on this?
Why is it taking regular Americans to expose this level of obvious corruption? https://t.co/886mDlM7J1