Huh? ‘No demand’ for Valerie Jarrett book, but it’s No. 14 on NY Times’ best seller list

Valerie Jarrett’s book “Finding My Voice: My Journey to the West Wing and the Path Forward”, has not even cracked the top 1,000 on Amazon or Barnes and Noble but somehow has a spot on the New York Times bestseller list.

The book, published April 2, is number 1,030 on Amazon’s list of top sellers. It ranks 1,244 on Barnes and Noble, where signed copies are being sold for less than the suggested retail for unsigned copies. 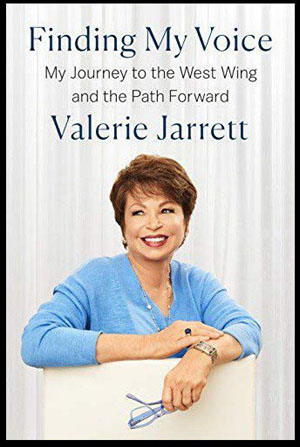 The book made it to 14th on the New York Times bestseller list.

Some in the book publishing business are questioning whether Jarrett, a top adviser to former President Barack Obama, paid a company to game the numbers, The Daily Caller reported on April 14.

“There’s no way the book should have a place on the NYT Best Seller list. Inconceivable,” one prominent book industry insider, speaking on condition of anonymity, told the Daily Caller. “There’s likely an effort to game the system, it’s the only explanation.“

Jarrett likely paid a company that helps authors buy their way onto the list, the insider said.

According to BookScan, which tracks sales figures, Jarrett’s book sold 12,600 copies in its first week. That should have put it at number five on the best seller list, “except they excluded a big chunk of her sales for being sketchy. They’ve declared shenanigans,” a book editor, who wished to remain anonymous, told the Daily Caller.

The Publishers Weekly bestsellers list, which is based on BookScan data, omitted Jarrett’s book from their list of top 25 titles, even though it seemingly should have been seventh.

“This is the first time that I’ve seen a book that doesn’t show up on the PW list but when you drill into BookScan, you see that it had sales that should have been there,” president of the conservative book publisher Regnery, Marji Ross, said.

The book editor that requested anonymity told the Daily Caller: “We all know that when BookScan excludes a book, then it’s been left off because of something sketchy, a bunch of bulk sales or an unusual geographic spread.”

The first industry expert added, “There are some industry sources who don’t think she should be on the list because of fraudulent reporting.”

Just 10 days after launch, the hardcover price of Jarrett’s book on Amazon was slashed to $18 from the $30 list price.

“Viking supposedly paid seven figures for this, so they were hoping for Michelle Obama level publicity and number one bestseller,” the anonymous book editor told the Daily Caller. “Number 14 is a huge disappointment. For $1 million you want to sell 200,000 copies in order for this to work out. For a book like this that should have been publicity driven, you’d want 40 to 50 thousand in the first week.”

“There’s no demand for the book and no one is reviewing it,” the editor continued. “She’s gotten very little media. She doesn’t know how to sell it and no one wants to sell it for her.”

030 on Amazon, BookScan, but No. 14 on NY Times’ best seller list, Finding My Voice: My Journey to the West Wing and the Path Forward, Huh? Valerie Jarrett book is No. 1, New York Times Bestseller List, Valerie Jarrett, WorldTribune.com