If you’re going to destroy racist history, might as well start at the beginning, right? 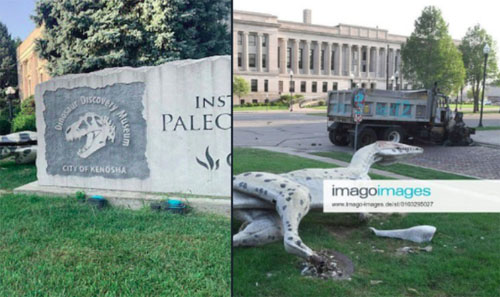 On Tuesday, the third consecutive day of rioting in Kenosha, one of the many targets of the leftist mob was the Wisconsin city’s Dinosaur Discovery Museum.

In yet another blow against white supremacy, the mob toppled the Dilophosaurus at the Kenosha museum.

“Kenosha must not have statues of any slave-owners or Confederate generals, because the best rioters could do was topple the statue of the dinosaur next to the sign outside,” a post on Twitchy.com noted.

But another social media user pointed out: “Dilophosaurus saved the day for Lee at Fredericksville.”

One social media user opined on the reasoning behind the attack on the dinosaur museum, noting that dinosaur bones “are often found next to the fossils of systemic racism.”