A Colorado grandmother who attended President Donald Trump’s Jan. 6 rally but never entered the Capitol building has discovered that she is on the FBI’s terrorism watch list. 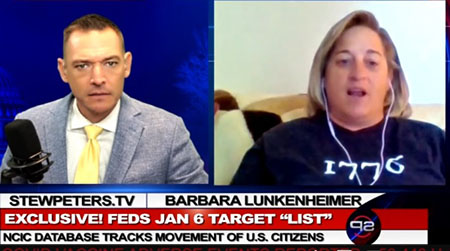 Barbara Lunkenheimer told the Stew Peters TV show [see below] that she was told by a security forces officer, when trying to shop at an Air Force Base Exchange, that she had been entered by the feds into the National Crime Information Center (NCIC) database’s “terror watch list,” and she is now prohibited from entering a military base.

Lunkenheimer is a grandmother of 5, paramedic, former 911 dispatcher, and is married to a federal police officer who is a U.S. Marines veteran.

Lunkenheimer has never been charged with a crime.

Meanwhile, The Daily Wire reported on Sept. 17 that it found in a review of court records that some 60 individuals are still being held in jail eight months after the Jan. 6 breach of the Capitol.

Among those still behind bars:

• Jose Padilla has been detained since February. “Padilla is 40 years old and has lived in Tennessee for most of his life. He previously served in the U.S. Army during the Iraq War. After he returned home, he was diagnosed with posttraumatic stress disorder (‘PTSD’) and began receiving disability benefits. Prior to his arrest, he was a stay-at-home dad who managed his family’s household affairs and cared for his three sons during the day while his wife worked as a librarian. He has no criminal history or history of substance abuse. He also has no known ties to extremist groups,” Judge John D. Bates summarized. Prosecutors argued that his being a stay-at-home dad and veteran were reasons to hold him in jail. The government also argued that his military service-induced PTSD was a reason to hold him, an assertion that the judge sharply rebutted — pointing out that if the government believed he was a suicide risk, it had done little to ensure he got help in jail.

• Ryan Samsel, who allegedly pushed a bike rack that was serving as a barricade, purportedly causing it to strike a police officer, was arrested on Jan. 30 and held for seven months without being indicted or having a preliminary hearing, according to court records. He was finally indicted on Aug. 25. By then, he had been held in solitary confinement at a D.C. jail and had been beaten. He is now being held in the Central Virginia Regional Jail.

• Douglas Jensen, who allegedly had a knife at the Capitol, was released from jail, then sent back for violating his terms of release when he was found using a “WiFi-connected iPhone to stream news from Rumble.”

How grandma paramedic learned she is on FBI’s terror watch list added by Editor Two on September 20, 2021
View all posts by Editor Two →