To close a prayer he delivered from the House chamber Sunday to mark the swearing in of the 117th Congress, Democrat Missouri Rep. Emanuel Cleaver altered the traditional “amen” to say “amen and awoman.” 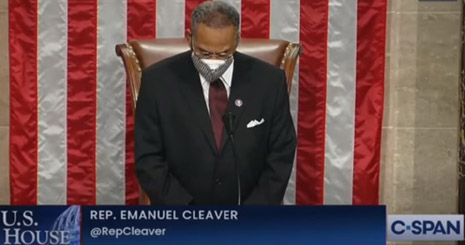 “May the Lord lift up the light of his countenance upon us and give us peace,” Cleaver said during his two-minute invocation, “peace in our families, peace across this land, and dare I ask, o Lord, peace even in this chamber.”

“We ask it in the name of the monotheistic God, Brahma, and ‘God’ known by many names by many different faiths,” Cleaver said before closing with “amen and awoman.”

While many observers noted that Cleaver was somehow attempting to be inclusive, the word “amen” has nothing to do with gender. The word translates from Latin to mean “so be it.”

Which makes the prayer ending even more ridiculous given that Cleaver is an actual ordained minister.

“Amen is Latin for ‘so be it,’ ” tweeted Pennsylvania Republican Rep. Guy Reschenthaler. “It’s not a gendered word. Unfortunately, facts are irrelevant to progressives. Unbelievable.”

“I guess the virtue signaling Democrats didn’t check the Hebrew etymology of the word ‘Amen’ to realize it has NOTHING to do with gender,” tweeted Colorado Republican Rep. Lauren Boebert. “But don’t let facts get in the way of a good virtue signal. Also, didn’t those words just get banned?”

Cleaver’s attempt to gender “amen” came just days after House Speaker Nancy Pelosi introduced new House rules that would “honor all gender identities” by eliminating specific terms such as mother and father, son and daughter, and aunt and uncle.

Instead, only gender-neutral terms such as “parent,” “child,” “sibling” and “parent’s sibling” would be allowed in the text of congressional rules.

According to the Democrat rules for “gender inclusive language,” their plan “modernizes the use of pronouns, family relationship terminology, and other references to gender in order to be inclusive of all Members, Delegates, Resident Commissioners, employees of the House, and their families — including those who are nonbinary.”

Calling the rules “future-focused” in a statement upon their release, Pelosi defended them as “the most inclusive in history.”