The time for Hillary Clinton to face any real consequences from her campaign’s funding of the Trump-Russia collusion hoax has long passed, California Republican Rep. Darrell Issa said. 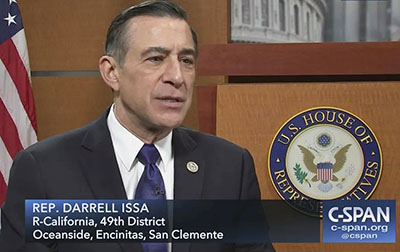 The report will disappoint but not surprise the thousands of commenters on social media who for more than 5 years have asked when there will be consequences in the U.S. system of justice.

Issa, who is on the House Judiciary panel that oversees the Department of Justice, said he expects Clinton will be let off the hook once again when special counsel John Durham releases his final report on the origins of the hoax, which is still months away.

” ‘Justice delayed is justice denied’ is not some sort of a trite statement. It’s very true,” Issa told independent journalist Sharyl Attkisson in a recent interview for her Full Measure program.

“Anything that comes out of the Durham report,” Issa said, “it could lynch Hillary Clinton, and it wouldn’t change a thing.”

Whatever is revealed in Durham’s report will come after the expiration date for bringing people to justice, Issa said.

“The fact is, time has passed. It is pretty irrelevant, except it’s a lesson to Congress that putting real-time limits and putting real meat in activities, including inspector general’s reports and so on, is more important than ever. The time it takes to complete an investigation, or the time it takes for Congress to get to the truth, impacts whether or not you’re going to get the truth and compliance in a timely fashion. If you can hold an administration accountable in real time, they will cooperate. If they know they can run out the clock, as they often do, they won’t,” Issa said.

Durham’s investigation has bee ongoing for nearly three years. It has lasted longer than Robert Mueller’s special counsel investigation, which was unable to establish a criminal conspiracy between Trump’s 2016 campaign and Russia which evidence has shown was created out of whole cloth by Democrat operatives and the Clinton campaign.

Hillary ran out the clock: Durham report ‘wouldn’t change a thing’ added by Editor Two on March 13, 2022
View all posts by Editor Two →