While conservative voices big and small are being systematically throttled on the Internet today, big-brand corporate goliath Starbucks is threatening to leave Facebook due to “hateful comments” posted by regular Americans expressing their distaste for the bland coffee makers’ nonstop social activist hectoring. 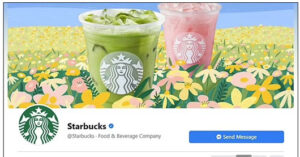 “Starbucks is in the process of evaluating their organic presence on FB, and whether they should continue to have a presence on the platform at all,” a “Facebook employee wrote to their colleagues earlier this week,” BuzzFeed reported May 6. “Anytime they post (organically) in regards to social issues or their mission & values work (e.g. BLM, LGBTQ, sustainability/climate change, etc.) they are overwhelmed by negative/insensitive, hate speech related comments on their posts.”

The key word in the above is “organic.” Leftists like to believe their ideologically rigid public pronouncements are spontaneous gestures from the heart, while any negative blowback they may receive is “orchestrated” bullying organized by nefarious networks.

Besides fulfilling an emotional need, the tactic is meant to conceal the muffling of any individual opinion deemed problematic to the progressive establishment.

There is also the unbearable blow to the ego that comes with widespread public condemnation of the New Leaders of our society. At the end of March, YouTube ignited a storm of controversy when it revealed that it was “testing” new designs that would hide the like and dislike buttons on videos. This despite the fact that the buttons are a favorite feature among the site’s users.

The awkward announcement came at a time when President Joe Biden’s official White House account was rapidly earning a reputation as the No. 1 Most Ratioed site on YouTube. The term “ratio” here refers to the negative feedback inherent when a video receives enormously more dislikes than likes. Biden’s official White House videos were regularly coming in at dislike-to-like counts of 10-1 or greater.

“The employee went on to note that Starbucks’s community management team has struggled to moderate hateful responses and is unable to disable comments on their page,” BuzzFeed notes. “They also relayed a series of questions from Starbucks management, which sought to understand how Facebook’s algorithms moderated or amplified comments on posts.”

Left hanging like a meatball in that last sentence is acknowledgment of the fact that left-leaning major corporations are weighing in on the use of major social media platform algorithms and how they can best be used to produce the outcomes they desire.

However, Starbucks is not acting here merely out of concern for its narrow corporate interest. This is an attempt to entice Big Tech titans to enact censorship of anti-progressive thought.

“Starbucks’s reevaluation of its Facebook presence comes amid a wider reckoning of the hate and misinformation that continues to proliferate on the platform,” BuzzFeed mournfully observes.

The concluding two paragraphs of the article are where the game is given away:

Rashad Robinson, the president of Color of Change, a civil rights organization, said he was encouraged by the idea that Starbucks would leave but noted that change won’t happen just “by corporations stopping advertising.” He called for lawmakers to act and impose laws to regulate the company.

“I can see other companies joining Starbucks — but unless Facebook is accountable to a set of rules and standards, then their exit from Facebook won’t change Facebook,” Robinson said.

In many ways, Starbucks is acting similarly to major organizations such as Amazon or the NCAA when they threaten GOP governors in states that have passed legislation against biological males competing in women’s sports. The message: We’re leaving if you don’t do what we want.

The essential difference is that here the tactic provides cover for Big Tech to do what it has been eager to do all along.