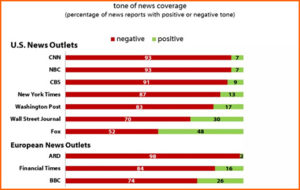 The results were overwhelmingly negative. Fox News came closer to neutrality but was ranked 52 percent negative and 48 percent positive, according to a report in Heat Street.

The study did find that on topics like the economy, coverage was more balanced: 54 percent negative to 46 percent positive.

Trump did get positive press reviews for the cruise missile attack on Syria. About 80 percent of all reports were positive about the strikes.