Not long ago, the Left ridiculed what it saw as “right-wing American paranoia over a bogus ‘Russian bear,’ ” a columnist noted.

Then-Secretary of State Hillary Clinton played up the “Russian reset,” even famously presenting the Kremlin’s foreign minister with a prop reset button. 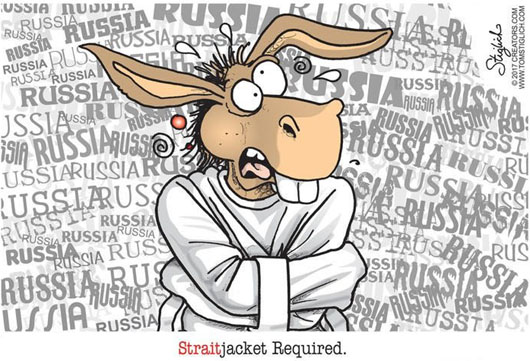 Now, the Left’s “Russia-is-Satan construct … serves a palliative for hatred of a presidency that so far cannot be stopped before 2020,” Victor Davis Hanson wrote for National Review.

“One of the stupidest policies in recent U.S. diplomacy was the prior lose-lose Obama program of first courting Putin as a misunderstood figure likely to reciprocate liberal empathies, then, when rebuffed, demonizing him as an ogre worthy of a new Cold War.”

As for Russia, Hanson wrote, “it is as much an enemy or friend of the U.S. as is China. But its espionage campaign against the U.S. pales in scope and resources to that of the Chinese. Russia’s aggressions along its borders do not match China’s intimidation of neighbors or its creation and militarization of some atolls in the Spratly Islands or its neocolonial global initiatives.”

North Korea’s nuclear proliferation “was mostly the work of China, not Russia,” Hanson wrote. “Russia worries about China and radical Islam almost as much as we do. In terms of population and economic clout, current defense investments, and bellicosity shown the U.S., China is the existential threat, not Russia.”

“Damning Moscow 24/7 makes up for prior appeasement of Putin 24/7, the same way that the ‘collusion’ fantasy diverts attention from the reality that Obama-administration officials sought to warp a U.S. election by abusing FISA courts, weaponizing the intelligence agencies, colluding with the Clinton campaign in peddling bought opposition research, working with unethical toady journalists, and planting informants in a presidential campaign.”

Hanson continued: “And the font of this malaise? Progressives need a scapegoat to blame for their disastrous election loss in 2016 and their lack of a persuasive agenda, which, hand-in-glove, turned over the Congress, the presidency, and the Supreme Court to progressives’ worst nightmare.”

Had Hillary Clinton won in 2016, Hanson noted, “there would be no Mueller investigation, either of Trump or of wrongdoing by Hillary Clinton. Now-fired or reassigned FBI grandees like Andrew McCabe or Peter Strzok and DOJ officials such as Bruce Ohr would have thrived.”